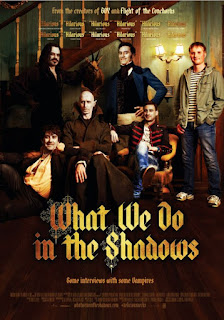 One of the best new shows I enjoyed over the last year was What We Do in the Shadows.  I was aware that it was based on a movie, and often I find it best to watch the movie first.  The reason is, especially when it comes to comedies, typically a large portion of the television show is going over the same jokes that were in the movie, as they tend to be retreads or assume most people never saw it in the first place.  Because of timing I figured I would watch the show anyway, though I was concerned that it would ruin the movie for me when I finally got around to seeing it.

I was happy to find that, though the two share the same spirit, they do not share the same characters (except for one episode, making it clear that the New Zealand crew are their own group) or, accept for laying ground rules, the same gags.  Though sharing the same name and general mockumentary style co-director Taika Waititi wisely reworked everything for the New York setting, with completely new subplots to boot.

Viago (Waititi), Vladislav (Jermaine Clement), Deacon (Jonny Brugh) and Petyr (Ben Fransham) all share a house together just outside of Wellington, New Zealand.  Problem is, they all have different personalities, and all come from different time periods.  Viago is an 18th century noble, while Vladislav was a 17th century warlord.  Deacon was a 19th century peddler turned into a vampire on the whim of Petyr, a Nosferatu-style bloodsucker who is said to be a few thousand years old .  They all agree to let a documentary crew film them in the months leading up to the annual Unholy Masquerade.

While they all have many of the usual conflicts roommates have, they are all part of the greater vampire community of Wellington, and tend to get along with most other supernatural creatures except for werewolves.  They spend nights hunting for pray, preferably virgins, though they seem hard to come by despite the efforts of Deacon's familiar Jackie (Jackie van Beek) to obtain them.  She also largely ends up being the one who cleans after the entire group.

Their relative peace is disturbed when one of the victims Jackie brings to them, Nick (Cori Gonzalez-Macuer), manages to escape the rest and gets turned into a vampire by Petyr.  The rest don't like him much, but generally tolerate him (largely because they all like his human friend Stu [Stu Rutherford] a lot better) until his constant bragging about being a vampire wreaks havoc with the group.

There are occasional moments that are outright hilarious, but most of the humor comes from the more subtle jokes and many of the references to past vampire movies and novels.  While billed as watching vampires be flatmates in an urban setting for laughs, there is thankfully quite a bit more going on, as each develop their own stories in different ways.  Taika Waititi and Jermaine Clement also manage to take what is largely an improvised movie and weave the scripted parts (which often involve some decent CGI effects) into the whole.

Another surprise is that, although there is some emphasis on what is left of the vampires' human sides, there is no shying away from the fact that these creatures would be violent predators.  No matter how much pretense Viago puts around trying to make someone's last hours comfortable, it's made clear that he is destroying someone's hopes and dreams as well as bringing grief to their families.  In the end, Jackie is no better, taking out her petty grudges from elementary and high school.

Blending these uncomfortable horror moments with the silliness of immortal creatures arguing over who has to do the dishes is key to the film, and probably the reason I enjoyed this.  It is different in many ways from the television show, with this group of vampires, despite their old-style costumes, still trying their best to integrate into New Zealand society, while their New York counterparts remain hopelessly out of step.  Again, if you enjoyed one, you will enjoy the other, as the atmosphere and general worldbuilding is the same, but they tend to avoid stepping on one another with the jokes.