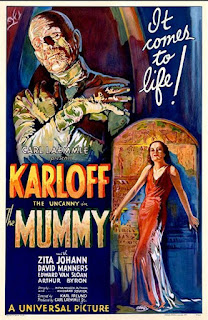 I cannot remember if it was a comedian or just someone in general conversation bringing up that one of the worst monsters in the Universal canon was the Mummy.  The question was why wouldn't one just get out of the way of a slowly shambling corpse rather than look at it and scream.  It would be a very good question - if The Mummy featured any of the above whatsoever.

There is a bit of truth to the matter in future movies - rather than doing a direct sequel to this movie, Universal waited a few years and created a whole new mummy called Kharis, who was more of a zombie - but wasting Boris Karloff in such a fashion would have been a catastrophe, and I'm sure he would have bowed out of the project if that were the case.  Frankenstein had made him a start with a non-speaking role, with praise being given on his physical acting alone.  The Mummy still allows Karloff to be physically imposing, but more importantly reveals him to be a great actor as well.

During an archaeological dig in 1921 a mummy is discovered by archaeologist Sir Joseph Whemple (Arthur Byron).  He calls in his friend Doctor Muller (Edward Van Sloan) to assess it, as unlike other mummies it appears that, rather than being properly prepared for the afterlife, the occupant of the sarcophagus was buried alive.  Not only that, but the Scroll of Thoth, thought to have the power to bring the dead back to life, appears to have been buried with it.  While Muller tries to convince Whemple not to open the box that contains the scroll, a young research assistant (Bramwell Fletcher) decides to go ahead and open hit himself.  He transcribes part of it while mumbling under his breath, which is enough to wake Imhotep (Karloff), who walks out with the scroll and leaves the young man insane.

A decade later Whemple's son Frank (David Manners) is on a dig.  He is about to give up when a man named Ardath Bey shows up and shows him where to find the undisturbed tomb of Anck-es-en-Amon, a priestess of Isis that was also Imhotep's lover.  It is soon discovered through Bey's attempts to revive her that her spirit was reincarnated in the half-Egyptian daughter of the governor of Sudan, Helen Grosvenor (Zita Johann).  In the end, both Imhotep and Frank Whemple vie for her affection.

Some of the plotting for The Mummy follows that of Dracula, but unlike him Imhotep doesn't seem to take any pleasure, or gain anything for that matter, from killing.  He lives a kind of half-life, largely immortal, but still hindered physically by the fact is flesh is dust held together by magic, but his motives for wanting Helen are much less predatory and more grounded in the idea that if he can love her through the millennia then she should as well.  It's a reincarnation theme that sets this movie apart, especially when it turns out Anck-es-en-Amon may not want to become like Imhotep, rather having her own ideas of what to do with the new life shown to her - and reluctance to completely suppress Helen.  Where some of the pacing may be similar, it was actually later Dracula films that pinched the idea of Mina being the Count's reincarnated love.

The other thing is that Imhotep is a magical creature.  When he does have to kill, he uses magic to do so, rather than slowly walking toward someone with arms outstretched.  He was a priest during his life in Egypt, and uses the old magic he learned to do his deeds.  Whereas there were clear rules on how to get rid of Dracula or Frankenstein's monster, the heroes really have no idea what to do about Imhotep.

This particular film also has the advantage of showing how quickly sound pictures developed.  The year before they were arguably still filmed stage plays, with a good portion of the action scenes appearing as if they were still filmed in the silent era.  The Mummy is one of the first horror films with a full score throughout, and with its blending of stock footage and more natural acting it struck me as a movie that was a bit easier of a watch for modern audiences.  It's still definitely of its time, including its colonial and racial attitudes, but director Karl Freund was a cinematographer before making this his directorial debut.  It shows, as there is much more movement to the camera, thus helping to draw the audience in.

Besides Boris Karloff giving one of his best performances, both physically and by keeping Imhotep as low-key as possible instead of having him chew the scenery, Zita Johann gives a great performance, especially after Anck-es-en-Amon awakens.  It is pre-Code, so there is a bit more skin than you would get in later films, but she is more than just eye candy.  It's too bad that Freund decided to brand her "difficult," thus making it hard to find work after this.  She has a natural appeal and charisma that should have made for a longer career, rather than generally leaving acting a couple years later.  Surprisingly, except for Karloff, it is the male cast that isn't given much to do other than some exposition and fulfilling the needed heroic and mentor roles.

It is a surprise that The Mummy didn't get an actual sequel, as many of the other Universal monsters got multiple ones.  The later series of Mummy films don't involve Imhotep at all, and that includes the Abbott and Costello one.  I do think that may be for the better as this film stands a unique entry, being a bit more fantasy than outright horror, and bringing back Imhotep for a second round may ultimately have been a big mistake.