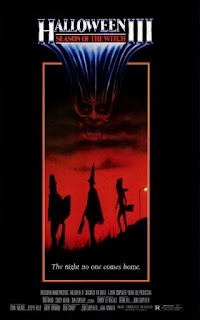 John Carpenter and Debra Hill created one of the best horror movies of the 20th century with the original Halloween.  I know there are those who retroactively pick it apart, but that's a trend that has been around forever.  I will still stand by the original Universal films as being some of the best as well, but if all you are concerned about is that anything older than a decade is not worth watching, then I guess there's really no way of changing your attitude.

Still, attitudes do change.  I will always maintain that Halloween II was a mistake.  Sure, the first made a ton of money, so the sequel was almost guaranteed to do the same, especially since they got Jamie Lee Curtis and Donald Pleasance back, John Carpenter was still tangentially involved and Debra Hill worked on the script.  However, if the original intent was to make a number of unrelated films with a Halloween theme year after year, then this was bad way to start.  It's not even that the sequel was a huge drop in quality on its own, but that if the intent was to do something different, then Michael Myers should have had his own series, kind of like Annabelle does.  John Carpenter was largely done with Myers after the first one anyway.

He had a bit more involvement in Halloween III: Season of the Witch.  He and Hill produced it and, even though he is not credited, he did the rewrite of Nigel Kneale's original script, while director Tommy Lee Wallace (a frequent collaborator with Carpenter) did some himself.  Kneale, responsible for such classic films as Quatermass and the Pit, was not too happy with the gore elements added into his story, and wanted nothing to do with the movie afterward, leaving Wallace to take the blame for how everything turned out.  Or, as later years and changes in opinion, the credit, depending on who you would ask.

Halloween is approaching, and Silver Shamrock Novelties is one of the most popular mask-makers in the United States.  Millions of kids are buying their witch, skull and jack-o-lantern masks and preparing for a major giveaway on Halloween night.  On the evening of October 23 a man named Harry Grimbridge (Al Berry) is admitted to a hospital where Dr. Daniel Challis (Tom Atkins) works.  The man is sure that Silver Shamrock is out to kill everyone.  Of course the staff thinks Grimbridge is crazy, and they sedate him.  However, soon after, a strange man comes in, murders Grimbridge, and then sets fire to himself in a car outside.

Challis goes about his usual method of coping with his job and his failed marriage, and hits the local bar.  There he is contacted by Harry's daughter Ellie (Stacey Nelkin), and the two begin to retrace Harry's steps to a remote factory town called Santa Mira that houses Silver Shamrock's factory and headquarters.  It is a largely Irish community with few residents and lorded over by the company's owner, Conal Cochran (Dan O'Herlihy).  Daniel and Ellie quickly discover that things are not right, as the masks hold a deadly secret that Cochran intends to unveil on Halloween night.

Despite Wallace largely adopting many of Carpenter's directing quirks and Carpenter and Alan Howarth providing the soundtrack, many people saw this as some sort of weird turn with a no-name director.  Audiences hated it, critics hated it, and the fact that it bore the Halloween label without any connection to the previous story or anything having to do with Michael Myers literally angered people.  Ironic, since these were many of the same people that slammed the second movie for just being more of the same.

It didn't help that Halloween III does have its share of problems.  We know what Cochran wants to do, but it is never made clear what he hopes to get out of it.  Transcendence?  Cleanse the world and start anew?  Bring the old gods back?  He never says.  Kneale's original script was more of a mystery, and had a huge amount of humor, much of which I believe still made it into the final movie.  There are parts where it is hard to believe that it is not intentionally hilarious, especially when Cochran is asked to explain himself.  In short, he doesn't.  Dan O'Herlihy is made to look both like a Bond-level supervillain as well as the typical corporate bad guy from the 1980s, and he seems to know the movie is not to be taken that seriously as he plays the part with a sinister glee.

Tom Atkins does the flawed hero bit well, and inserts a lot of humanity into what could have been a square-jawed leading man role.  Stacey Nelkin gets to be the amateur sleuth and the eventual damsel to rescue, as well as part of one of the best ending battles I have seen in a movie for a long time.  In some ways it seems like a warm-up for the alley fight in They Live.  Again, while there is tension involved, it plays out with what has to be intentional humor.  A mistake many people made going into this film originally was to take it a hundred percent seriously, when there are so many satirical elements at play as well as send-ups of other horror films.

Along with the humor is a decidedly vicious streak.  This got away with much more than I would have expected it to.  A head is literally ripped off of someone, a misfire of one of the chips in he masks leads to a particularly shocking end and, of course, Cochran's goal in selling all these masks to children is to murder them - a fact demonstrated quite graphically at one point.  When it sheds its satirical skin and gets nasty, it tends to do so quickly and effectively.  What was sad at the time is many critics, including Roger Ebert, were screaming for censorship right alongside the fake parent groups fundamentalist organizations had a habit of cobbling together back at the time, and this was one more movie added to their naughty list.  It is by no means a perfect horror film nor an astoundingly great film in any manner, but it is still quite entertaining and would have fared better if audiences had been primed for it.  As it was, the people who didn't want this type of movie in the theaters used that anger to make sure it quickly disappeared.

However, that's not the end.  I saw a television print of this years ago (I was probably 12 or 13) and wasn't that impressed.  As always, despite everyone screaming about movies like this corrupting our children (often against movies like this that had a rating from the beginning that said, "Don't take your kids."), whatever corrupting its supposed to do doesn't work.  It's not a movie for kids, nor were the other Halloween films before it.  And, thankfully, its target audience has been rediscoverying the movie.  It does show that there was a missed opportunity, and if it had performed better we could have had a nice little variety of movies (or two or three before Carpenter got tired of the concept) associated with the brand.  When the series returned to following Michael Myers, Carpenter and Hill did in fact bail.

Still, there is a lot here to like, from Atkins's and O'Herlihy's over-the-top performances to a whole sense of "What the hell?" when the plot is revealed.  Halloween III: Season of the Witch will still turn off some viewers (especially those who, again, think anything old is bad in the first place, as this definitely looks its time and place), but it is a movie that is long overdue the cult following it is beginning to gather.