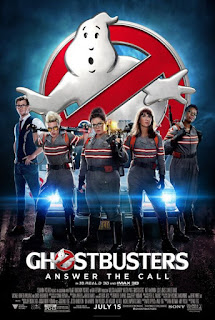 For decades Dan Aykroyd has been promising a third Ghostbusters film.  While Ghostbusters II was a financial success, it was nowhere near the fan nor critical success of the original.  Still, if everyone had been on board for it in the 1990s, and the proper script (that didn't break Sony's bank account) had come around, there was still enough life in the franchise to draw audiences back.  Of course none of that came to be.

Instead, after all the years have gone by, what we get is a reboot with an all-female main cast.  Director Paul Feig decided to follow up his Melissa McCarthy action-comedy vehicle Spy with this production, which had Aykroyd as executive producer and which Feig co-wrote with Katie Dippold, who had worked with him on a previous movie (also with McCarthy) called The Heat.  While there was some eye-rolling about the gender swapping early on, things heated up when the initial trailer dropped.  It became the most down-voted trailer on YouTube.

Honestly, there was a reason for it, and it was not because of the cast, although there was a significant amount of hand-wringing from from men who don't want to see women in any roll, as well as the cultural gatekeepers who cannot stand any change.  The truth is the trailer was bad, horribly misrepresenting Leslie Jones's role in the film and making it look like just another mediocre, bloated effects movie.  Despite what Dippold and Feig wanted everyone to believe once the movie itself failed, the trolls and gatekeepers are such a small amount of the fanbase that their boycotts barely affect the performance of a film.  Captain Marvel is an example of that, still being financially successful despite Brie Larson directly insulting the core audience for comic book films.

What caused Ghostbusters to fail were a number of factors, not least of all being that a good portion of the film turned out to be what the trailer promised, and in some cases being what some men feared it would be.  The added frustration is that there were so many elements in this that did recall the fun parts of the first two films with a potential for a good movie hidden in there somewhere.

Dr. Erin Gilbert (Kristen Wiig) is up for tenure at her university.  She is horrified to find out that a book she wrote years ago with her high school friend Abby Yates (Melissa McCarthy) is suddenly available.  With her tenure at stake she confronts Abby and her new research partner Jillian Holtzman (Kate McKinnon), who has continued with researching the paranormal.  During the conversation it is brought up how Gilbert was contacted by the curator of the Aldritch Mansion (Ed Begley, Jr.) due to a supposed haunting.  The haunting turns out to be real, resulting in Gilbert's face plastered all over YouTube and her tenure out the door.  The other two also find themselves searching for a new location when the dean of the college they are working at is appalled to find out their department still exists.

Reclocating above a Chinese restaurant, the three decide to go into paranormal research and see if Holtzman's plans to catch a ghost can actually work.  They hire a not-so-bright receptionist named Kevin (Chris Hemsworth) and are soon contacted by MTA security officer Patty Tolan (Leslie Jones), who reports a ghost in the subway tunnels.  Their investigations not only prove that they can capture a ghost if they want, but that someone is going around triggering paranormal events.  That someone turns out to be Rowan North (Neil Casey), a brilliant but insane man who plans to open the barrier between dimensions and lead an army of ghosts that will destroy humanity.

Part of the problem with this version of Ghostbusters is the same as what plagued the second movie: the villain.  Neil Casey is significantly creepy, but in the end he isn't the one doing most of the action.  There is not urgency in foiling his plans, as there is no question that the women will be successful in doing so.  No motivation, other than bullying, is given for his need to destroy the human race.  While he may not waste a good portion of the movie sitting around in a painting looking grumpy he still does nothing more than present an enemy that isn't a government official.

As for the main cast, they work.  I'm not the biggest Melissa McCarthy fan, but she takes on more of a character actor role this time instead of the lead.  Kristen Wiig is better in that job, but ultimately it is Kate McKinnon that that steals the whole movie.  Her line delivery, showing up with a can of Pringles under her arm for a ghost hunt, and just the character's constant delivery of new devices makes her a welcome addition to the world of the Ghostbusters franchise.  There is some controversy on how Leslie Jones's character of Patty is portrayed, but at this time around they made her an important member of the group right away instead of treating her like an afterthought.

No, the problem is not the cast.  Yes, part of the problem is Paul Feig, because for some reason he thinks we need more fart and poop jokes and to see a bad guy get shot in the balls by a bunch of women, since I guess that is how he interprets feminism.  I don't know what was Katie Dippold's part of the script, but Feig admitted that was all him.  Regardless, the movie starts off on a sour note claiming the builder of the Aldritch Mansion had state-of-the-art anti-Irish security fencing, because we can't go one movie without someone reminding us that the United States is racist and awful.  I am thankful it didn't continue on that unfunny track the entire time.

In the end, though, the main problem is that the movie is a reboot.  We have cameos from most of the surviving members of the original cast, but in this world none of the original characters exist.  However, fan service does, as this is almost wall-to-wall Easter eggs reminding us about the other two movies, from a Sta-Puft Marshmallow Man balloon a guest appearance by Slimer.  If you want us to respect your movie as a new imagining or creation that stands on its own it is probably a good idea to not stuff it full of references that remind us that, except for the great chemistry between the four lead actors, this is about as bland as most bloated blockbusters are today.  Audiences didn't stay away in droves because they had a problem with women playing the parts, but because they are tired of blowing a wad of cash at a theater to see the same movie over and over again.

Still, it is a shame that they don't get a better shot at it.  I know McCarthy has a tendency to work with Feig on a regular basis, but a sequel to this with the same four and maybe a director with some vision to take the series elsewhere, lay off the fan service and not try to redo the plot of the original (like is hinted at in one point) would be welcome.  Unfortunately this is one more example of how a movie that is "not too bad" just isn't going to cut it when we are talking astronomical budgets.  This movie cost twice what Ghostbusters II did when adjusted for inflation and failed to breathe new life into it.  It remains to be seen what Ghostbusters 2020 does, but, again, I hope they learn the lesson that they need to give us something worth seeing and not just count on nostalgia - especially when that nostalgia can be rented for less money and less hassle than than taking a risk on another stinker in the theater.