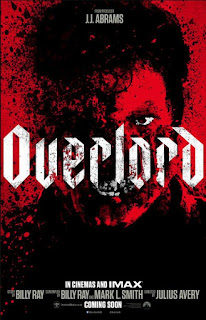 The opening scenes of Overlord are supposed to be riveting, as planes filled with soldiers fly over occupied France and prepare to drop a team tasked with taking out a Nazi radio jamming device located in a church.  As we get to know the soldiers shortly before anti-aircraft fire starts buffeting the plain and blowing up others nearby, one thought went through my head.

When, exactly, were the Armed Forces integrated?

I should know this since this is a major historical era I have studied again and again (right answer: 1948).  But this just goes to show how even if you know something is wrong you begin to doubt the facts that you do know.  Even if the 101st Airborne had been integrated at the time, there was no way there would have been a black NCO commanding them.  There was a good third of the country that still hadn't figured out by that time that hanging people due to the color of their skin was wrong.

If you are going to stage a riveting airborne infiltration, especially one that goes so wrong and is designed to leave viewers on the edge of their seat, the last thing you want them doing is trying to work out historical facts and dates in the back of their mind.  If you are making a movie that at some point is going to have zombies and supersoldiers crafted by evil German scientists, then you pretty much don't need the most unbelievable part of your movie being a total disregard for basic history.  Everyone knows zombies are not real and that the German occult experiments, while making for good reading, were generally laughable.  Totally disregarding a near century-long fight to be allowed to serve your country on equal footing with everyone else is a different matter all together.

So, what is this?  An alternate universe?  It seems like that's the best guess of Jovan Adepo, who plays the lead character of Boyce.  It might well be, since the racial tensions that would have been present at the time are suspiciously absent, with the only concern about Boyce being whether or not he has the guts to kill the enemy when the time comes.  It's a bit of wish fulfillment that could have been briefly explained in a written prologue so that it didn't seem so jarring.  Instead it smells of tokenism, casting people of color in roles that were written for white characters just so Twitter trolls don't start to whine.  In doing so they commit a greater crime of ignoring a fight for acceptance that is central to African-American culture.

At this point the movie has been hijacked by this effort to be inclusive at all cost, so it takes a bit to get one's head back in the game.  When one does they find that Overlord is a halfway decent action horror flick, even if there is really nothing of substance in the end.

After a disastrous air drop, Boyce reunites with Corporal Ford (Wyatt Russell), a demolition expert leading what's left of their group to figure out a way of taking out the church tower as planned.  They are soon joined by Tibbet (John Magaro), Dawson (Jacob Anderson) and Chase (Iain De Caestecker) and head toward the village.  On the way they encounter Chloe (Mathilde Ollivier), a woman who is being forced by an SS officer named Wafner (Pilou Asbæk) to provide sexual favors to protect what remains of her family.

Chloe takes them in, but Wafner shows up for his due soon after.  Despite Ford's warnings, Boyce interrupts.  He is then sent out to bring the other two back, but instead ends up on a truck bound for the church where he discovers a disturbing fact: a scientist by the name of Dr. Schmidt (Erich Redman) has been able to make a serum out of some muck under the church that has the power of bringing the dead back to life.  The problem is there are side effects, including aggression and cannibalism.

When Chloe's brother Paul (Gianny Taufer) is captured, Boyce convinces Ford to help rescue the boy and take out the labs along with the tower itself.  Unfortunately, an escaped Wafner decides to experiment with the serum on himself, so no one expects what is waiting for them in the church.

The main surprise is that our heroes aren't tasked with taking out hordes of walking dead.  The zombies themselves aren't really so much the Romero type, but actual reanimated dead with all their faculties - at least until they go insane from the physical alterations from the serum.  It typically takes complete destruction of the brain (not just a shot to the head) or fire to destroy them.  The grand finale is more of a one-on-one between the two you expect, and it goes as predictably as it sounds.

The film is shot well, without an over-reliance on CGI or filters.  In fact, a point of its pride was going with practical effects whenever possible.  A gripe I do have, especially during the last third, is the you would swear J. J. Abrams, who is only listed as a producer, grabbed the camera at some point.  This is due to the prevalence of lens flairs, an unfortunate trademark of Abrams's that director Jules Avery seems to have decided to emulate.  The action is filmed well and, as a gory b-movie, it does its job.

In the end, though, it fails at being a memorable movie.  Despite its relatively low budget it still pretty much failed at the box office, largely due to an ad campaign that seemed to be vague about what the film was about, other than there would be zombies at some point.  Bokeem Woodbine, who is only the movie at the beginning, is the probably the biggest name star in the whole thing unless you are a major Game of Thrones fan.  That said, there is enough chemistry between Jovan Adepo, Wyatt Russell and Mathilde Ollivier that you care about what happens to their characters, and Adepo especially gives a low-key but emotional performance.  It's a shame they were placed in something that, despite all efforts, still feels generic and slapdash.