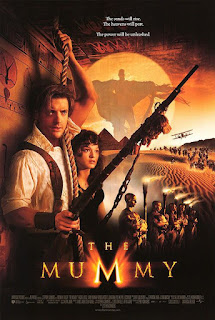 Much has been made in recent years of effects-laden action films, largely remakes or sequels.  It's treated as if Hollywood was pure at some time in the past, but now goes back to the same trough over and over again knowing that the cash will be there.  In truth, there has never been any time when Hollywood was pure art.  Typically, if you want art, you need to be looking at the few foreign film industries where art is respected more than box office returns.  In Hollywood art often happens by accident.

The Mummy was itself made in the Golden Age of Hollywood, but was meant to cash in on other monster films that had been popular a year before.  Despite its intentions it has stood the test of time, still remaining an enjoyable watch to this day.  And, while a new revival of artistic filmmaking erupted in the 1990s, the blockbusters never really went away.  Among all the classic independent films of that decade remain a number of other films that still, although never meant to be grand artistic creations, are respected years later and have themselves stood the test of time.  Ironically one of those was a new version of The Mummy.

It was kind of a surprise at the time to see this, as there had been other Universal characters brought back to varying degrees of success.  However, this wasn't in a clump like with the originals or the Hammer films.  They are scattered throughout the decade and, unlike modern attempts, felt no need to try to connect them in a universe.  These were reliable staples that people respected, and by the time this one got made it had been almost three decades since Hammer had given us our last Mummy movie.  It had been over a decade since he made a cameo in The Monster Squad.  So, why not?

This time we get the story from the beginning: Anck Su Namun (Patricia Velasquez) was the mistress of the Pharaoh Seti I (Aharon Ipelé), but her and the priest Imhotep (Arnold Vosloo) were madly in love.  In a desperate attempt to be together, they kill the Pharaoh, and then Anck Su Namun kills herself.  Imhotep attempts to raise her from the dead, but is discovered.  His priests are mummified alive, while he is cursed to an immortality where he is forever feasted upon by scarab beetles.  A secret society called the Medjai is established to make sure Imhotep remains buried forever, for if he is let loose it would signal the end of days.

In 1923 a division of the French foreign legion stumbles upon the ruins of Hamunaptra, where Imhotep is buried.  Rick O'Connell (Brendan Fraser), an American adventurer, is the lone survivor of a battle at the location, and is let go by the Medjai as they believe he will not make it back to civilization.  He is discovered in a Cairo prison three years later by Evelyn Carnahan (Rachel Weisz) after her brother Jonathan (John Hannah) steals an artifact from him.  In exchange for his life he promises to lead them to Hamunaptra where she hopes to find the Book of Amun-Ra.

Also heading there is a team of Americans led by a Egyptian scholar and Beni (Kevin J. O'Connor), who Rick thought was dead after the battle.  While Rick's group finds Imhotep's sarcophagus, it is the Americans who find a different book with the spells to awaken the dead and, after reading it, flee back to Cairo.  The Medjai, who tried to prevent the tomb from even being opened, now must also join with Rick's band to find a way to return Imhotep to his slumber and prevent him from waking Anck Su Namun and forcing her soul into Evelyn's body.

When I first saw this movie it was still at a point where, when I could, I saw most of what came out in the theater, good or bad.  I expected The Mummy to be horrible, since the trailers were mainly dull and special-effects laden action films were just as prevalent as they are now.  Instead, I got something completely different.  Brendan Fraser had largely done comedic roles up to this time, but he truly came to his own in Rick O'Connell, and proved himself to be a late-blooming action star.  Personal situations and bad career choices soon put an end to that, but he definitely could have been bigger if he continued, even though The Mummy Returns was nowhere near as fun as this film.

I believe that is what got me.  The film was fun.  Yes, it was made to cash in on the fame of the old film while being little like it, and a number of the special effects were horrible even for the late '90s (though not as bad as the sequel), but it seemed like the type of escapist adventure film I had not seen in years.  By this point it had been 10 years since Indiana Jones and the Last Crusade, and those movies themselves were tributes to a bygone era.  Stephen Sommers kept the action going throughout, never letting up, and never letting the audience down.

The film had been offered to a number of horror directors previously, including Clive Barker, George Romero and Joe Dante.  Each one wanted to do a pure horror film, but Sommers, who also wrote the screenplay, wisely decided that was not what was needed.  It also kept the motivation of Imhotep to be reunited with his love, but skipping the reincarnation angle (a wise choice, since Bram Stoker's Dracula had a similar plot to the original Mummy along those lines.

I also appreciate that this time around we are blessed with a varied crew of characters.  Sure, a good many of them are meant to be mummy fodder or to sacrifice themselves so that the plot can go on, but the mains are all enjoyable.  Rachel Weisz alternately plays a strong, independent character, helping to occasionally rescue the others, while still showing some vulnerability.  Sommers never makes the mistake of infusing too many modern ideals into Evelyn, nor does he suddenly make her a superhero that can take on hordes of undead Egyptians.  Instead, she, like O’Connell, seems like a normal human being thrust into strange circumstances.  I believe that is where much of the enjoyment comes from;  all audience members can identify and imagine themselves as these characters wrapped up in this adventure.

Sure, there are many geographical mistakes, anachronisms and dodgy effects (particularly the transformation scenes, which were unconvincing in 1999) for someone to pick apart, but this is not a History Channel documentary on ancient Egypt.  The effects that do work, particularly Imhotep’s head forming out of a sandstorm to swallow a plane, still look great.  Mostly I am glad to see that a movie I enjoyed 20 years ago is still just as enjoyable as when I first saw it.