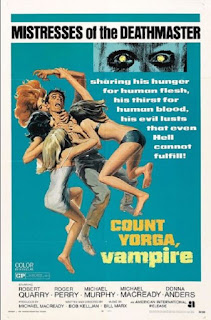 Somewhere along the line director Bob Kelljan decided to make a real movie, and so most of the sex (if any of it was ever filmed) went out the door.  It was actually given a plot and retooled for mainstream audiences.  While definitely cheap, the level of violence was the same as Hammer films of the same period.

I say all this because if you are looking for some forbidden exploitation gem, then you are going to be heavily disappointed.  The good news is that despite its low budget and amateur cast it still turns out to be a pretty decent vampire flick.

Count Yorga (Robert Quarry) has moved to Los Angeles from his home in Bulgaria, bringing along his manservant Brudah (Edward Walsh).  He inserts himself into a group of friends, agreeing to do a seance to contact the dead mother of Donna (Donna Anders).  Of course no one knows he's a vampire, and he uses the occasion to plant a hypnotic suggestion in Donna and, after her friend Erica (Judy Lang) and Erica's boyfriend Paul (Michael Murphy) get stuck on the Count's property, takes the opportunity to start Erica's transformation into the living dead.

As Erica gets sicker, Paul and Donna's boyfriend Mike (Michael Macready) consult with their friend Dr. Hayes (Roger Perry), who quickly becomes convinced that Count Yorga is indeed a vampire.  The three hatch a plan to rescue Erica from his clutches and put an end to his reign of terror.

A good portion of the plot was lifted directly from both the Bela Lugosi version of Dracula as well as Bram Stoker's novel, just with things moving along a bit faster.  I didn't notice that all of this happened within a short span of days, as it seemed like the time between Yorga's initial attack on Erica and the rest getting their act together to be interminable, filled with scenes of Michael and Paul walking in random places while overdubbed dialogue occurs between the two.  Since any dialogue not given to Quarry in this movie (save Macready going way overboard on the opening narration) is little more than exposition at best, it is a hard slog to get to the real action.

When it does get going it manages to work, almost as if the last third of the movie was assembled out of a completely different script.  There is a shocking scene involving Erica and a cat leading to a tense visit to Yorga in an attempt to keep him up past his bedtime.  Finally, the battle between our heroes, Yorga and his vampire brides provides a satisfying ending.

While Roger Perry is about the best of the lot when it comes to the good guys, Robert Quarry gives quite a performance as Yorga.  The hilarious monologues during the opening seance lead into a cool menace as he appears more the monster and less the clown.  He doesn't just talk about how old and wise he is as a vampire, but his actions often show it.  What is even better is that Yorga is a vampire with his own personality.  Quarry doesn't waste time trying to imitate Dracula or other performances, but instead is not only a dangerous creature because of his strength but also because of his intellect.

The movie can be frustrating at times (I will never understand why so many people go vampire hunting at night) and feels weirdly neutered in a number of places.  It is bloodier than Universal horror films, but we are still at the level of puncture wounds rather than ripped-out necks and blood spraying around the room.  I do credit Bob Kelljan for going a step beyond a lot of filmmakers of his caliber at the time and hiring a lighting crew, which means that since they went through the trouble of doing some interesting set design with Yorga's mansion that we get to see it.

While I would not call this a great movie, but Count Yorga, Vampire has more to offer than its reputation would have one believe.