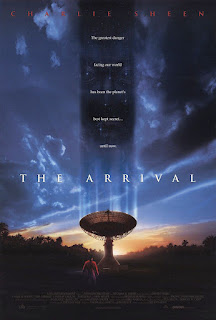 The idea of an alien invasion led to one of the biggest blockbusters in history in 1996.  Despite its flaws the movie performed above all expectations and managed make its leading actor one of the biggest stars in Hollywood.  Plot points have been debated ever since it came out, but its brilliant mixture of practical and digital effects, done on a budget, helped hide many of the plot holes. That movie, of course, was Independence Day , directed by Roland Emmerich and starring Will Smith, Jeff Goldblum, Bill Pullman and many others.  It had a wonderful ad campaign behind it, tied in with a major American holiday and was pretty much guaranteed success when released.  However, another alien invasion film, one with an arguably more realistic plot and on an even smaller budget, beat Independence Day to the theaters by little over a month.  That movie was David Twohy's The Arrival .  Zane Zaminsky (Charlie Sheen) is part of NASA's program to search for extraterrestrial life.  Frustra
Post a Comment
Read more 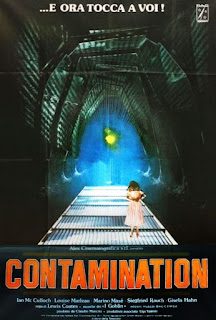 Don't be fooled when seeing a director name like Lewis Coates.  Italian directors, and to a lesser degree Spanish ones, often adopted American-sounding names to slap on the versions of their films that would be released in theaters and drive-ins in the United States.  A major reason is that, toward the end of the 1970s, Italian cinema more and more was known for making virtual copies and unsanctioned sequels to hit Hollywood films.  One big example was Lucio Fulci's  Zombi 2 , supposedly a sequel to George A. Romero's Dawn of the Dead, which itself was renamed Zombi when recut for the Italian market by Dario Argento. Luigi Cozzi is the real name of Lewis Coates, and before making Contamination he had made the weird, almost incomprehensible sci-fi film Starcrash with Caroline Munro in the lead, Christopher Plummer as the Emperor of the Galaxy and David Hasselhoff in an early role.  Nominally it played as a cheap rip-off of Star Wars , although Cozzi has maintained that he d
Post a Comment
Read more 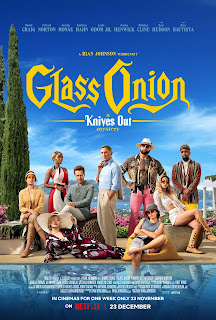 In the wake of Netflix fumbling the ball with programming and, as of the date I'm writing this, dumping movies they paid to have made, it's a good thing they did one thing right.  Glass Onion , the sequel to Rian Johnson's hit mystery film Knives Out ,  got a week in the theater.  In usual Netflix style, however, they were so anxious to get the movie on their streaming platform that they ignored the fact that, if left to run, it would have earned back much more than its modest budget. This is despite the fact that, other than Daniel Craig returning as detective Benoit Blanc, this is not related at all to the what happened in Knives Out , nor does it feature any of the cast other than Noah Segan and Joseph Gordon-Levitt.  Segan plays a completely different character - a hippy house guest named Derol - while Levitt voices the "Hourly Dong", a timekeeping device supposedly created for billionaire Miles Bron (Edward Norton) by avant-garde composer Philip Glass.   Whil
Post a Comment
Read more 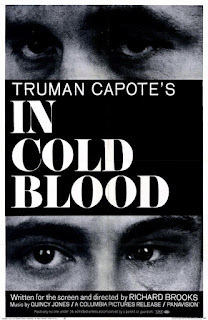 Writer Truman Capote was one of the larger-than-life characters of the 20th century.  He was openly gay at a time when it was dangerous, both physically and career-wise, and he had a voracious appetite for alcohol and mind-altering substances.  It was the latter two that ultimately brought him down, but what exhausted him creatively, at least for a good part of the second half of his life, was what would be the novel he was best known for.  Rather than being a book of fiction, In Cold Blood presented a profile of Dick Hickock and Perry Smith, a pair of petty criminals who murdered an entire family when a home invasion robbery went wrong.  Though non-fiction, it was written in novel form, letting the reader get to know not only the killers but those who were tasked with bringing them to justice. Writer and director Richard Brooks brought Capote's novel to the big screen in 1967, filming a good portion of it in locations where the killers went, including the actual house that had bel
Post a Comment
Read more 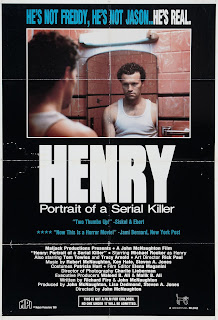 Henry Lee Lucas and Ottis Toole were a pair of serial killers that operated in the early 1980s.  Both met in prison, with Toole serving time for petty crimes and Lucas for the murder of his mother in 1960.  Famously, Lucas would go on to claim responsibility for over 300 murders, though he was convicted on only 11, and may have been responsible for only three of those.  Still, he quickly discovered the fame he received from inflating the number, as well as special privileges he could get by laying claim to nearly every unsolved case he heard about.  Lucas died in 2001 of heart failure, Toole years before of cirrhosis of the liver.   Though not at the top of the list of serial killers one hears about outside of true crime documentaries, Lucas's case was still fresh in 1986 when first-time director John McNaughton was asked by producers Malik and Waleed Ali to make a horror film after a documentary on the early wrestling scene in Chicago fell through.  Along with Richard Fire he wrot
Post a Comment
Read more 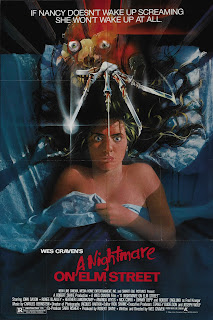 Both director Wes Craven and New Line Cinema were at a turning point in the early 1980s.  While The Last House on the Left and The Hills Have Eyes solidified Craven's reputation as a horror director it did not exactly result in receiving further work the way he hoped.  The movies made a decent profit off their low budgets, but, particularly with Last House , they did nothing for Craven's reputation.  Famously that movie put both he and producer Sean S. Cunningham on the outside of mainstream Hollywood for most of the 1970s.  Craven started doing television work and earned a bit of a cult hit with his adaptation of Swamp Thing , but the big score kept eluding him.  That is, until he finally got funding for a story he had been shopping around for years about a child molester, murdered by the angry citizens of the town, haunting the dreams of their children.  The villain was changed to a child murderer, the makeup Craven had in mind brought in line with the movie's budget, a
Post a Comment
Read more 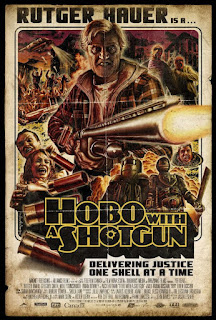 Back when Quentin Tarantino and Robert Rodriguez made Grindhouse  they held a competition.  Famously, the movie itself had a number of fake trailers, but for its premiere at 2007's SXSW festival a number of homemade previews of exploitation and horror films were made for a contest run by director Robert Rodriguez.  One of my favorites was The Dead Won't Die , which featured a topless woman mowing down zombies with submachine guns.  Another favorite, and the eventual winner, was Jason Eisener's Hobo with a Shotgun. The original featured David Brunt in the title role, cleaning up a city full of criminals and perverts.  It was well-made and a lot of fun, and it earned Eisener a little bit of prize money as well as the inclusion of Hobo with a Shotgun as one of the trailers in Canadian showings of Grindhouse .  Although both Planet Terror and Death Proof are good in their own right, the shorts were what really made the movie, and it was hoped that a few of them would be expande
Post a Comment
Read more
More posts