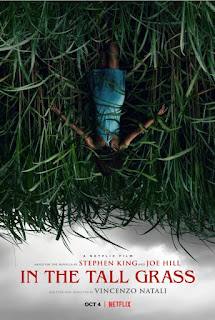 I have been a Stephen King fan since I was in grade school, and I still pick up every new novel or short story collection he releases.  It's usually a rewarding experience as well.  Few authors as prolific as King have maintained a consistent quality over the years.  He has written some stinkers, but often when you think that's about it for him he comes up with something fresh.

Although he writes under a pseudonym, everyone knows at this point that Joe Hill is Stephen King's son.  While I would never say writing talent is something you inherit, Hill has become a popular author in his own write.  The influence from his dad is there (though, to be honest, it is there in every modern horror writer who came after him) Hill still has his own voice that is not as dark and pessimistic.  This sometimes contrasted when they collaborated on the novel Sleeping Beauties, where it felt like certain story elements were constantly trying to pull in different directions.  Particularly, there are characters that, if you are a Constant Reader, you automatically recognize as patented Stephen King bad guys, through their inner thoughts and dialogue.  Sometimes, unfortunately, it is too safe a formula for him, and it really stands out when contrasted with Hill's more grounded characters.

I have not read the novella for In the Tall Grass, and it is something that will have to be done (I should really start diving into Hill's books), but a glance over the plot of the original gives me the idea that, though a good portion of this was King and Hill, quite a bit of the rest is writer/director Vincenzo Natali expanding on it.  Whether that helped or hurt things is most likely one of the central questions when watching this.

Siblings Becky (Laysla De Oliveira) and Cal DeMuth (Avery Whitted) are driving cross-country to San Diego.  Becky is pregnant and not sure she can keep the baby.  She also seems to experiencing a number of complications that she ignores.  As they stop by the road so she can take care of her nausea, Becky hears a young boy calling for help from a field of grass.  She convinces Cal that they need to get him out of there, and he agrees since it sounds like he is near.  However, upon entering, Becky and Cal are immediately separated and she loses cellphone reception while trying to call 911.

While Cal eventually encounters the young boy, Tobin (Will Buie Jr.), Becky encounters his father Ross (Patrick Wilson).  Ross tries to help Becky find Cal, while Tobin leads Cal to a clearing where a large rock, covered in pictograms, stands in the center of the field.  The rock is hinted at holding the key to the way out, but it also seems to wield a dark power over whoever touches it.

While both the siblings and Tobin's family (which also includes his dog Freddy and his mother Natalie [Rachel Wilson]) search for a way out, Becky's ex-boyfriend Travis (Harrison Gilbertson) comes searching for them.  It turns out that they vanished two months ago, and all the clues lead him to the field.  Not only does he become lost as well, but also realizes that different timelines continue to loop back and forth upon each other.  It also becomes apparent that in at least one of these Ross has touched the rock, and has decided he must help the others by making them touch it as well.

I have to admire the atmosphere of this film.  A good horror writer, rather than dumping a ton of unbelievable situations on the reader (or viewer, in this case) often takes something oddly ordinary and makes it unbelievably frightening.  We know vampires and werewolves do not exist, but anyone can picture losing themselves on a hot day, after stupidly forgetting to bring water or snacks, and getting themselves stuck in a situation where rescue may not happen.  Add to that the primal fear of being separated from loved ones or being helpless to aid them when you know they are in trouble, and you start touching on true, human fears.  By the time supernatural elements enter the equation they are, though dangerous, almost a relief, since although they represent a trial they also represent a way out of a situation.

Vincenzo Natali plays this for all its worth, making the grass a living entity, or at least one controlled by the mysterious rock at the center.  He also doesn't spend a lot of time trying to explain what is happening.  It is made known that the rock is older than even the pre-Columbian inhabitants of North America, but it is never given an alien or human origin.  There are others among the grass than just the DeMuths and the Humboldts, and this is hinted at by the range of ages of the vehicles parked around an abandoned church across the street from the field, but it is unclear if the form we see the others in is the eventual form those lost in the grass take or if they are a manifestation of those that carved the pictures on it in the first place.

Unfortunately this atmosphere is pierced by the character of Ross Humboldt.  Patrick Wilson does a good job as a central villain, even if he seems too much like Michael Keaton at times, but the character itself is a lazy rewrite of your typical King bad guy.  He starts off with questionable morals (being in real estate), and touching the rock turns him into a homicidal evangelist for whatever dwells within it.  His original devoted family man facade crumbles as he becomes more frustrated with the situation he is in and lashes out at different people, from his son to his wife to Travis, to find someone to blame for the predicament.  He's a supposedly good person with these seeds of evil within him just waiting to germinate, and they are fed and grow, just like the grass that imprisons him, until he uses his new-found powers to imprison all the others and use them as he desires.

Will Buie Jr. is the other standout, looking emaciated and frightened throughout but, depending on the timeline, also coldly in control of the field.  Instead of becoming homicidal and religiously obsessed like his father, his interaction appears to leave him cold and detached from the world, knowing when people or things will die and not just caring.  Throughout most of the film, though, we see him in either an earlier or different time in which he is just a frightened boy trying to survive.

While central to the plot, neither Laysla De Oliveira nor Avery Whitted give memorable performances.  The tension between Cal and Travis seems tacked on, while Becky spends a good portion of her time helpless despite getting a few good licks in at Ross.  Their flatness, combined with Patrick Wilson's over-the-top performance, have the unfortunate result of piercing the surrealistic balloon of tension that Natali is building throughout.

While it does make for an interesting watch, particularly because Natali avoids trying to do leaps of logic to tie everything together, there is still something empty about the movie.  It may be because some of the performances are uneven, or if it feels like a few other things, though not needing to get a huge explanation, could have been developed further.  While I don't necessarily agree with the assessment that the movie is pointless or directionless, I can still see how someone may feel that way.  It is also quite disturbing in places where begins to slip into David Cronenberg style body horror.  I think the general frustration is that Vincenzo Natali had an idea of how to improve upon King and Hill's story, but then failed commit in the same way that either of them would have.  It still has the elements of a good story, and leaves much open for discussion, but for all that it can't avoid ringing hollow.