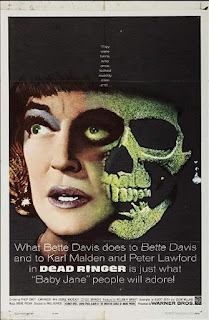 An unfortunate rule when it comes to actresses is that at a certain point, unless you are willing to switch from playing lead roles to playing a supporting (or even smaller) role as a matron once you get above a certain age then your career is over.  In a lot of cases that doesn't matter who you were.  Back in the Golden Age of cinema you didn't even have a directing gig possibly awaiting you.

There were many actresses that decided it wasn't worth the fight, but also decided that they wanted to be remembered a certain way in their work, and by their 30s they were out of the business.  There were others that accepted the roles they would have to play.  Still there were others that doggedly hung on.  Bette Davis is somewhere in between the last two.

In 1962 Davis starred opposite Joan Crawford in the thriller Whatever Happened to Baby Jane?  For a time it resurrected the career of both women but, where Crawford was increasingly relegated to starring in cheap exploitation productions, Davis was a bit more choosy with her roles going forward.  Still, Davis wisely continued in the thriller genre for her next movie, but also wisely went with Paul Henreid as a director, someone she had known personally and worked with over the years.  She also latched onto something that had not only a good gimmick, but gave her the chance to show off her acting skills.

Margaret DeLorca (Davis) is grieving, or at least appears to be, the death of her husband.  Her sister Edith (also Davis), whom she has not connected with in years, is invited to the funeral as well.  Edith was in love with Margaret's husband years before, but he chose Margaret instead largely because he thought he had got her pregnant and wanted to do the right thing.  Because Margaret married well she now lives in a large mansion, while Edith struggles just to keep her small cocktail bar open.

As Edith begins to learn more about Margaret's manipulations of her and her late husband, she hatches a plan to take over her life.  This involves murdering Margaret and leaving a suicide note claiming to be Edith.  The only problem is that, while Margaret is certainly not above manipulating and killing to get what she wants, Edith is generally a decent person.  This is something not lost on playboy Tony Collins (Peter Lawford), Margaret's lover who quickly realizes that something is off, even if Edith's policeman boyfriend (Karl Malden) does not catch on.

Although Malden overacts a bit and Lawford is left doing his best with a badly written character, they only figure peripherally throughout the film and largely to deliver the pulpy ending.  Largely it is Bette Davis that is the focus as she tries to navigate the obstacles of taking over someone else's life, especially since Edith and Margaret had been estranged so long and walked in different social circles.  Henreid directs it well, making a wise choice for black and white as I am sure it helped get around censors in the situation of a gruesome onscreen death.

I was expecting more of a horror aspect once her ruse is discovered, and it does heighten the tension. Law ford shows up toward the end once Edith has become a bit comfortable as Margaret, but it unfortunately never escalated to a cat-and-mouse situation.  The poster is a bit misleading if you are expecting something along the lines of Psycho, as this plays more like a noir film.  Unless you’re a rich woman with a vindictive twin there is nothing here to really get the scares going.

Still, if you are looking for a bit of an old fashioned thriller, this is still worth a look.  By putting the emphasis on its star the movie is able to overcome some lapses in logic and slow spots and provides a decent follow-up to Baby Jane.