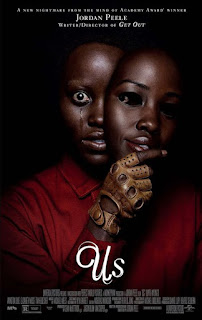 There are few things that scared me as a child, which is probably why I like horror films so much.  Monster movies, science fiction, old fashioned scary shows - yes, I liked a number of cartoons as well, but other than Scooby Doo (which always had comedic horror elements) I can barely recall much of any of them.  The ones I do recall, like my favorite episodes of Tom & Jerry, still had supernatural or horror elements.

Occasionally I could get myself worked up by reading too much about ghosts, but I always understood that, if they do exist, they are not something that can actually harm me.  I was keenly aware of real monsters in society, so the make-believe ones were more fun than anything else.  The Devil, like with all children, was a frightening antagonist early on, but as I left Christianity behind Satan became just another character, sometimes tragic and sometimes a monster, but no more real than the Wolf Man.

So, what is it about doppelgangers that always freaked me out?  Chances are there is a double, or even a triple and a quadruple, out there somewhere among six billion people.  I was shocked to see a picture in one of the record stores I go to that looked like me from 20 years ago performing on stage with a punk band - something I knew for sure I wasn't doing at the time, no matter how much I would have loved to.  I'm sure there are many differences, but he still looked enough like me to give me pause.  Typically, meeting an unrelated twin would be little more than a fun story to tell.  But doppelgangers, on the other hand, you knew would just be wrong if you encountered them.

As humans we love order in our lives, so much that we try to force a chaotic universe into something we can comprehend.  Any sense of something wrong, that you just know is wrong but can't put a finger on, is absolutely terrifying.  It gnaws away, bouncing around your mind and crouching somewhere in the back, pouring over every bit of knowledge stored deep within to try and figure out just what it is.  It's like when suddenly you forget the name of a famous actor or the title of a tune that just keeps running through your head; it's there, somewhere in the back, unraveling itself until you have an answer.  A doppelganger always struck me as something that would trigger that type of response, only once I figured it out it would be something I would wish I had not.

I would imagine a doppelganger would also know deep down that it was wrong as well, but would also be aware of the reason why.  It would also want to be right, and be angry that it could never be.  And I would be the focus of that anger.  It makes for a striking, if simplistic, allegory regarding class.  The double is the shadow self, the one that didn't get to have what you have, that didn't get to exist the same way you do.  While in some this righteous anger builds to a point where it drives them to work hard to get the things the other side has.  In others, the drive is not to claim what the others have, but to burn it all down.

Us is nominally a take on Invasion of the Body Snatchers, just like writer and director Jordan Peele referenced The Stepford Wives as an allegory for institutional racist attitudes in Get Out.  This time around it is class that is being tackled, much in the same manner as The Time Machine did.  The combination of the two, the fear of being replaced and class struggle, under Peele's hand once again feels like something new and fresh.

Adelaide (Lupita Nyong'o) met her doppelganger in an funhouse attraction in Santa Cruz, California as a young child, and a return to the area with her husband Gabe (Winston Duke) and her children Zora (Shahadi Wright Joseph) and Jason (Evan Alex) is rather unwelcome, especially when they decide to meet their friends Josh (Tim Heidecker) and Kitty (Elisabeth Moss) at the beach where the ride still stands.  She reveals to Gabe what happened to her as a child, and that a series of events are leading her to believe that the girl she saw is coming for her.

He is initially dismissive until a strange family appears outside their summer home and they quickly find themselves attacked by their doubles.  Adelaide's double, Red, explains to her why they have arrived, and what they intend to do.  Against all odds, though, the family fights back and is able to survive.  Unfortunately, it turns out that not everyone is so lucky, as everyone's double is coming up from the sewers and attacking.

There are a number of twists and turns as this goes on, but they are handled deftly by Peele.  The commentary on class division is quite obvious, so he just lets it exist as it is rather than trying to lay it on too thick.  Not everything is explained about the doubles (or, as they call themselves, the Tethered), as Red is in many cases making wild guesses herself when explaining who they are to Adelaide.  As I have been saying in a number of reviews lately, explaining everything is not always a good thing; leaving some mystery often heightens the effect of a good story.  His use of a more modern fear, that of abandoned or unknown places (service tunnels and older, unused rooms, for example) is also quite striking.

Lupita Nyong'o is great, both as the protective mother and the vengeful Red.  She plays both roles in an unpredictable manner, so you can never rely on preconceived notions built about her during the calmer first third of the film.  Although I'm sure there were stunt doubles used in a number of cases, both Shahadi Wright Joseph and Evan Alex have physically demanding roles which they handle well, even if the character Zora is written a bit too much like every mopey movie teenager.  Winston Duke is also good in his role, even if Peele went too far in figuratively neutering the character of Gabe.  You can have strong male and female characters in the same movie without compromising either one, and there was no reason to make Gabe into a bumbling sitcom style father.

I predicted with Get Out that Jordan Peele would become one of the more interesting of a new generation of horror directors, and I am glad to see that I was write.  He has an understated style of directing and, like Stanley Kubrick, has a photographer's eye for a number of shots.  Like George Romero he doesn't shy away from political commentary, but he also doesn't let it overwhelm his movies.  There are a not enough current genre directors with their own style.  Us isn't a perfect movie, but it is an exciting, creative and well-done horror flick that, like some of the best in the past, also manages to present a grander happening in a world even if it doesn't have he budget to show it in detail.  Peele also, fortunately, knows when it is time to end things, and for once a movie ends at the point it should rather than having three or four unneeded codas.