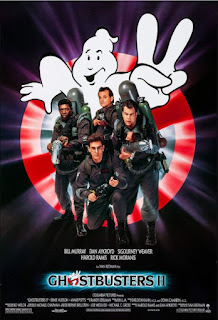 In my review of Ghostbusters, I referred to this as a mediocre sequel.  Keep in mind that when this came out I was able to scrounge my own money together to see it with my then girlfriend in high school.  We were the same age and had the same general memories of seeing the original when it came out.  Because Bill Murray was so against doing another one the fact that this even got released was a pleasant surprise.  Then, of course, we sat through the film.

The disappointment was such that, until I watched it for this review, I had never seen it again.  Literally 30 years has passed since I had seen it, and I really had no desire to see it again.  My expectations were low, and I was bracing myself.

This is only to find out that, while it has significant flaws, it is not that bad of a movie after all.

My views are, of course, tempered by the fact that I spent 30 years hating it at this point instead of, when it came out, five years of revering the original.  I know that these days five years might as well be ancient history, but in the 1980s it was barely any time passed.  By 1989 VCRs were common in most households, and not just a rich person's little toy.  Since we could rent the films there was no reason to pay the inflated prices for the tapes, and you can bet Ghostbusters was rented by me or someone I knew, especially around Halloween time.

That means there was a lot expected of this film.  Bill Murray was practically dragged kicking in screaming back into acting and only made one film, Scrooged, between the two Ghostbusters movies.  There was a lot pressure for Ivan Reitman and Harold Ramis to deliver, and Dan Aykroyd, who has been an advocate for continuing the series for decades, also jumped in on the writing.  The core cast was back, and Winston (Ernie Hudson) even made it on the poster.  So, what could go so wrong that I would avoid a film for so long?  After all, it was technically a financial success, and not the disaster that the 2016 remake was.

Dana Barrett (Sigourney Weaver), in the five years since the last events, has moved on from Peter Venkman (Bill Murray) and another unnamed man whom she actually maried, and now has a baby named Oscar (William T. Deutschendorf, Henry J. Deutschendorf II).  Ray Stantz (Dan Aykroyd) owns an occult book store and occasionally does children's parties with Winston.  Egon (Harold Ramis) has gone back into serious studies of the paranormal, while Peter is hosting a psychic-themed television show.  The Ghostbusters went bust themselves when they were sued for the events in the first film, with allegations that they had staged the whole thing.

When Oscar's baby carriage takes on a life of its own the guys get together and start investigating, finding to their dismay that a river of pink slime is flowing beneath the streets of New York.  The means of the discovery lead to their arrest, but they are vindicated after rescuing a judge from a spectral attack during their trial.  It soon becomes apparent that the slime is connected to a portrait of a man named Vigo the Carpathian (Wilhelm von Homburg), whose spirit inhabits a painting being restored in the Museum of Art by Dana's slimy boss Janosz (Peter MacNichol).  Vigo plans to possess the soul of a child as it turns midnight and 1989 turns into 1990 so that he may become ruler of the Earth.

Honestly, as much as I was expecting to hate this again, I found that in a lot of ways that there is more of a movie here than in the first one.  The original Ghostbusters was heavily improvised and felt like a number of skits sewn together with the major plot kind of thrown in at the end.  It worked wonderfully, but probably would not have with any other cast.  This time around the plot guides the film rather than just being something to throw in to organize the chaos.  When it comes to the pink slime, caused by all the anger and hatred in New York, it works.  In the end both Dana and Oscar need to be saved, there's more tangible danger for the crew than there was in the first and it seems like they are more of a team this time around as well.  They seem like a bunch of guys who have weathered some bad times, and Winston doesn't seem like an afterthought.  Rick Moranis is brought back and rivals Charlie from It's Always Sunny in Philadelphia when it comes to be being the team's legal defense, and has some great moments throughout.  Sigourney Weaver's part is expanded as well, giving her more time as an actual part of the gang.

The problem with making it more plot-driven and less chaotic was that they landed on an awful villain.  Vigo the Carpathian spends the majority of time in his painting ordering Janosz around, and once he gets out proves less of a challenge than Gozer.  One major rule with sequels is that the next bad guy has to be meaner, bigger and more indestructible than the first.  The slime has more threat and personality than Vigo.  A smaller plot about getting New Yorkers to be nice to one another to overcome the slime is about as bad, and thank goodness isn't emphasized as much.  I couldn't remember how the movie ended, and I was glad it didn't with all of New York holding hands and singing "Kum Ba Yah".

For better or worse Ghostbusters II was also influenced by The Real Ghostbusters, which had become quite popular after the release of the first movie.  Annie Potts's character was redone, and Slimer appears more often.  More importantly, while Ghostbusters was definitely the type of PG you would expect before "concerned parents" started whining about Gremlins and Indiana Jones and the Temple of Doom, the second chapter is the more toned-down of PG we've grown to expect these days, which means just a few dirty words away from a Disney sing-a-long.  Although that may have affected some viewers' opinions (good or bad), it's really not as noticeable as the lack of a strong villain.  Sure, Gozer wasn't a bundle of personality, but fighting a giant marshmallow man was a lot more fun than a 16th century warlord who looks like he's been constipated for nearly half a century.

It is important to note that even though my opinion of the movie has changed somewhat, Ghostbusters II in no way stands up as well as its predecessor.  It is a decent movie on its own, and I am forced to admit that its box office success was warranted, as it is one of the better blockbuster films of the 1980s.  However, the world would still be happy if there was only one Ghostbusters film, despite Dan Aykroyd trying to get a third one made throughout the latter part of his career.  It looks like he is going to get his wish, and the results of that remain to be seen, but in the case of this series the first time was the charm and, as far as an extended universe goes, they just should have stuck with the cartoon.