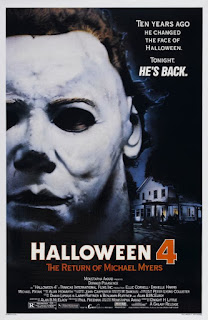 It's more well-known now, but at the time Halloween 3: Season of the Witch was released, no one was aware that Halloween was supposed to be a standalone movie in what was planned to be a series of unrelated films.  John Carpenter and Debra Hill were planning something along the lines of American Horror Story, and originally had no intention of continuing the Michael Myers story beyond what we saw in the 1978 film.

What they, and producer Moustapha Akkad, did not expect was the movie to be such a success.  The result was, instead of immediately going with another story, Halloween II came out in 1981.  Although the movie was made three years later it took place the same night as the original events, with Laurie Strode (Jamie Lee Curtis) being taken to a hospital while still pursued by Michael Myers, who in turn was also pursued by Dr. Loomis (Donald Pleasance).  In the end, it appeared that both Myers and Loomis had died in an explosion, thus ending the original story and leaving Carpenter and others to start pursuing their original goal.

Problem is, when you practically invent an entire genre and do a follow-up, people expect more of the same when they see the name slapped on a movie.  Thus, critics and audiences were confused when the third installment had absolutely nothing to do with Michael Myers.  It has had its own revival since, with fans appreciating it years later, but at the same time it garnered much the same reaction as when South Park aired a Terence and Phillip episode as an April Fool's joke.

For years I personally did not really want to go beyond the second movie because, unfortunately, the fourth and fifth parts seem to be the exclusive domain of AMC, and I never saw the point in watching what were considered by-the-numbers slashers if most of the slashing had been done by the station airing them.  It didn't help that many of the Halloween films seemed to have a worse reputation than the Friday the 13th series.  To make things worse, when the series did return to Michael Myers, John Carpenter had long abandoned the series, and it was just Akkad hoping to make a few more dollars off of an old name brand.

10 years after the events in Halloween II, Michael Myers, who was badly burned and has remained in a vegetative state (though stored in a locked, underground room in a federal mental facility) is being moved to a new location.  Dr. Loomis also survived the blast, though badly crippled and scarred, and is not too happy to find out that Myers was moved without his permission.  As he suspected, Myers takes this as an opportunity to escape and, as the next day is Halloween, will be headed back to Haddonfield.

In the decade that past Laurie Strode got married, had a daughter named Jamie (Danielle Harris) and then, along with her husband, died nearly a year before the events in this movie take place.  Jamie was adopted by the Carruthers family, and while her foster parents are out their daughter Rachel (Ellie Cornell) has been tasked with watching her.  Unfortunately, Myers learned of his niece after overhearing a conversation between some doctors, and his main goal for his trip home is kill her - even though he is not picky about removing anyone else along the way.

Loomis is on his trail, and manages to convince Sheriff Meeker (Beau Starr) that Michael has returned, which becomes quite obvious as the bodies start piling up.  While they wait for backup from the state police and a mob of locals join the hunt for Michael, Rachel and Jamie struggle to survive the night.

Despite its reputation of being a more by-the-book slasher film, the truth is that Halloween 4 deserves quite a bit more attention than it gets.  Moustapha Akkad may have not cared about any result except a few more dollars in his bank account, but director Dwight H. Little and screenwriter Alan B. McElroy put quite a bit of effort into making a movie that at least carried on some of the spirit of the first.  I believe they largely succeeded, as The Return of Michael Myers is much more enjoyable, both as a movie and as a continuation of the story, than the second movie was.

A lot of that credit goes to Little, from the spooky opening sequences to the fact that, although there is a higher body count, Myers still spends a good amount of time in the background.  Some of the pacing occasionally seems strange - particularly the visions Jamie has of her uncle prior to his arrival, which are never clearly explained - but it doesn't rely on one-dimensional teenagers as fodder.  From the criticisms I had heard about it, I was expecting a Lothario, a stoner, a joker, etc., all lined up for someone to practice their makeup effects.  Instead, there is more emphasis on developing the events that happened in the original, even if no explanations are given.

The latter has always been a good thing in the Halloween films.  In this timeline Laurie is still his sister, and for some reason he has it out for his family, but the original movie never referenced any family connection; the only motive Michael seemed to need was that he was mocked, and in both the original and the 2018 sequel it seems that anything other than fawning appreciation from the little ants that he considers the rest of humanity to be means they deserve to be stomped on.  Since Laurie was made his sister in the second, what little motivation he seems to have appears to revolve around just making sure his entire family is dead.  As Loomis says, he is just pure evil, and must be destroye - nothing else.  This is something the later sequels for this timeline should have remembered.

The acting in this was also much better than the second movie.  Danielle Harris is great, displaying a range and depth that is beyond what one would have expected in a movie of this type.  Jamie is a broken child from the beginning, and constant bullying and a feeling of not belonging doesn't help.  While some of the final scenes are a bit jarring with just how far she has been pushed she still manages to pull it off.  While Ellie Cornell is certainly no Jamie Lee Curtis when it comes to physically fighting off Myers, her character of Rachel is a great substitute mother/sister combination, often willing to sacrifice for Jamie if need be.  Donald Pleasance receives top billing this time around as Loomis is given much more to do, especially since what little actual motivation Michael has seems to also revolve around making the doctor's life as miserable as possible.  Pleasance is reliable as ever, even if the dialogue gets a bit cheesy and repetitive sometimes.

I think that Halloween 4 gets a bad reputation many times because it came out at a time when slashers were falling out of favor, and more people were apt to listen to a movie critic at the time who said it wasn't worth watching rather than checking it out for themselves.  Even just taken as a horror film on its own it is quite effective and better than much of what was coming out at the time in the same genre, although by the end of the 1980s this type of movie was being replaced more effects-laden horror and new directors who were willing to take more chances.  It seems out of step with the times, but watching it now it reveals itself to be the last truly good film in the original series before it went off the rails and tried to explain things that really didn't need to be.