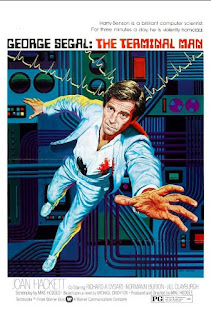 While I still run into some older people who treat computers like they are Satan contained in a box (and, unfortunately, some people from my own generation as well), they have come a long, long way.  The Terminal Man was written by Michael Crichton in 1972 and there is a significant part of the novel explaining computers, workstations, time-share on the terminals and a number of other things that were a reality when your typical computer was an expensive behemoth that often took up its own floor of a building. They were also something alien and imposing to most people, and frighteningly cold and inhuman.  That most people only knew of computers from science fiction movies didn't help.

When I read the book in about 1995 a lot of the concepts of 1970s computer technology were already alien to me, having grown up as home computers advanced in power and usefulness. The idea of surgically implanting electrodes into someone's brain in order to short-circuit seizures, and thus prevent violent outbursts, however, was still something of science fiction.  There was no idea this idea would have worked in the 1970s or the 1990s, and it's questionable if we would have the technology to do it now - or even the willingness.  Although The Terminal Man was partly a pulp sci-fi novel, it, along with A Clockwork Orange, was meant to question using scientific methods to control violent impulses at the price of taking away free will.

At the time the movie version was made computers were still largely at the same level as in the book.  Michael Crichton himself was brought in to write and direct but, not ever being really satisfied with his novel, started taking the opportunity to fix a number of things.  While Crichton would later get to work in this manner, Warner Bros. was scared he was making too many changes and brought in Mike Hodges, the director of Get Carter,  to write and direct the movie.  While Hodges ended up producing what is essentially an artistic science fiction horror film, somewhere along the line he missed the tone and impact of the novel completely.

Harry Benson (George Segal) is a computer and robotics expert who, after barely surviving a car accident, became subject to blackouts, violent rages and a deep conviction that machines were going to take over the world.  He agrees to aid Dr. John Ellis (Richard Dysart) with an experiment to place electrodes in his brain that would be powered by an atomic power pack in his shoulder.  If successful, when one of his blackout episodes is detected, the electrodes would stimulate parts of the brain that would cancel out the seizure and keep Benson functioning normally.

Psychologist Janet Ross (Joan Hackett) is against this treatment, believing Harry to be genuinely psychotic and need of traditional treatment.  She still agrees to aid Ellis in verifying if the treatment works, which at first it seems to.  Benson, though, has no intention of being incarcerated again, and with the aid of his current girlfriend Angela (Jill Clayburgh) escapes the hospital.  It is at this point they learn that his brain, rather than tempering the seizures to avoid stimulation, is doing just the opposite, resulting in numerous blackout periods and a killing spree throughout the Los Angeles area.

Where Hodges goes superbly wrong is in muddying the waters with much of the plot.  There's not really a major reason given for why predictable blackout periods begin to occur, while in the book it is clear that Benson learns how to set the seizures off in order to get a pleasure reward from the implants.  Though the violent results may not be what he plans, he knows full well what he is doing.  Hodges instead has him acting more like a malfunctioning machine, even emphasizing the point, which takes away some of the impact.  It is going at the anti-mind-control angle from two different sides, but it can be argued that Crichton's concern about any control over the state of a human mind trumps Hodge's seeming technophobia.

Even for the standards of older horror and science fiction films The Terminal Man is achingly slow.  It's not just an observation from an age of short attention spans; if I was my age in 1974 I am sure I would find this to be interminable, especially when compared to how quick-paced the book is.  That is a sad thing to say because other movies that move a deliberate pace are able to do so fairly decently without feeling like a slog.  Both Stanley Kubrick and Terence Malick, who have similar directing styles to what Hodges does in this movie, loved it, but Kubrick and Malick's work is usually much more interesting to watch.

That said I can see where some of the admiration comes from.  The movie is artfully, and beautifully, shot.  If there were more instances in the film similar to where Benson kills his girlfriend, with her blood and the water from the waterbed mingling among the tiles on the apartment floor and creating various patterns, I would be able to excuse the pace.  Despite allegedly basing a good portion of the movie on artwork I fail to see it other than in a few sequences.

It doesn't help that all the characters, including Benson, are rather dull.  George Segal never pulls off the cunning, evil scientist routine, and spends a lot of time looking silly in a blonde wig or trying to act like he thinks someone having a seizure should.  We never have any development of him, or any of the doctors, as characters, so it is impossible to really care much about what happens to anyone in the film.

While The Terminal Man is a good novel (despite what its author thought) and probably deserves a good adaptation, I don't know if even done properly that it would work with modern audiences who don't have the same overwhelming fear of new technology.  There are also so many current concerns about mind control, through the manipulation of information to whether children are being indoctrinated while in school to simply the Orwellian concept of control of our language to alter our thoughts.  Technology, and the world, has rushed ahead of both the book and this movie and, while it may have a few admirers, it is one of the worst examples of how to ruin a creative work.