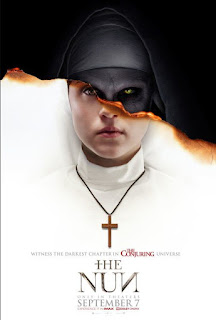 I have voiced my problems with the Conjuring universe before.  While it has produced a number of decent to good movies so far, my beef has always been with the real Ed and Lorraine Warren, and how these movies make them look like holy crusader heroes.  In real life they are an embarrassment to anyone who takes the supernatural seriously, or who would like to have any real research done beyond just trying to prove it doesn't exist.  Frauds like the Warrens taint everyone, including those they supposedly helped - which often included people in need of real psychological help.  In the instances where there was any true supernatural event their bumbling around probably made things worse.

While The Conjuring and The Conjuring 2 were supposedly based on real-life events, we are being asked to believe the same people who perpetrated the Amityville hoax.  My conflict, once more, is that regardless of what I think about the real-world Warrens, this material makes for good horror movies.  Also, the farther you get from the supposed real material and into spin-offs and fictionalized backstories, the better you get.  This goes even as far back to the original Amityville Horror, where the second movie, devoid of any pretensions of being a true story, was arguably the superior one.

The Conjuring 2 had two specters: The Crooked Man and the Nun, the latter being a manifestation of a demon named Valak.  Arguably it was the scarier of the two.  While the Crooked Man was more of a traditional family haunting, Valak was a direct antagonist to Lorraine Warren (Vera Farmiga).  Unlike Annabelle, though, this was not something sitting in the Warrens' supernatural museum; it was largely a character made up to add a continuing subplot between the movies.  It proved to be a popular villain, so naturally the Nun had to get its own movie.

In a remote Romanian abbey in 1952 a nun (Charlotte Hope) hangs herself and is discovered by Frenchie (Jonas Bloquet), the only local who is willing to deliver supplies to the nuns due to rumors of the place harboring a great evil.  Father Burke (Demián Bichir) and Sister Irene (Taissa Farmiga) are dispatched by the Vatican to find out what happened and to determine if the abbey is still holy.

It soon becomes clear that it is not.  The figure of a nun (Bonnie Aarons) haunts the grounds, and Father Burke soon begins to relive one of his worst failures.  Irene investigates further, and quickly finds that the situation is more dire than predicted.  It turns out that a medieval noble opened a passage to Hell and released Valak, but the church was able to seal the passage.  Unfortunately, bombing during World War II damaged the abbey and the adjoining castle, reopening the gateway.  Lukily the relic that closed it before still exists, and now Father Burke and Sister Irene must make sure it is closed for good.

The Nun has not had the greatest of reviews, and I can understand why.  There are too many leaps in logic (I doubt even a major demon could bury someone and make grass grow over the grave within seconds) and too much Hollywood Catholicism.  Still, Taissa Farmiga gives a restrained and tense performance, which is perfect contrast to Demián Bichir's sometimes over-the-top melodrama.  Jonas Bloquet delivers some well-timed, and well-needed, comic relief to the proceedings, as well as providing someone not clergy that gets to be a hero.

The real star of the show, though, is not even the Nun itself (it gets to loom and be scary, but not really much more than any other horror movie ghost).  The set design of the abbey, crumbling and with unrepaired scorches from the War, is striking.  It's an actual castle in Romania, and director Corin Hardy does his best to bring it alive.  It's ringed with crosses to keep Valak contained, with crosses hanging throughout the catacombs as well.  There are deceivingly bright spots throughout, but most of it is dark and empty, filled only with the bones of various knights.  Instead of screaming, "It's unholy!" in our faces, Hardy holds back and shows us in detail how unhealthy the place is.

Despite its overall creepiness The Nun is still not that frightening of a movie, which is going to let some people down after the big build-up in The Conjuring 2.  It does rely too much on jump scares, and typically when one is coming they might as well have had trumpeters announcing it, for all the subtlety that went into presenting how evil has corrupted the abbey goes out the door when it comes time for some action to happen.

I still think this is worth the time as long as you accept that there is going to be more atmosphere and an almost Hammer vibe rather than the outright frightening aspects of Annabelle or the more subtle build-up of the hauntings in the previous films.  That may be why I liked it when so many others don't; despite the jump scares being too obvious, this feels much more like an old-fashioned horror film than any of the new breed, and it does so without trying to wink at us and tell us how clever its being.  Since clever is not exactly what I would call The Nun anyway, it may have even been a happy accident.  Give this a few years to get outside the shadow of the rest of its cinematic universe and it may just be one of those that slip into cult status.