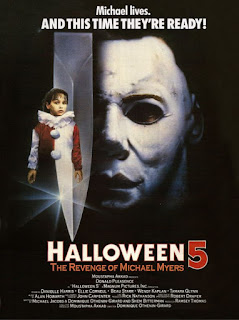 While Halloween is often credited with starting the slasher genre that dominated horror films in the first part of the 1980s, for the large part the original movie avoided a lot of the cliches that became part of it.  Halloween II came dangerously close to being too similar to many of the original's clones, while Halloween 4, despite being criticized as such, managed to avoid falling into many of the traps as well.

The fourth movie, after rejoining the story of Michael Myers and abandoning the concept of becoming an anthology series, even had the perfect ending to the story.  Jamie Lloyd (Danielle Harrison), the niece of Michael Myers, with the combined trauma of her parents' deaths, school bullying and her uncle trying to kill her (as well as having some sort of psychic link with him at times) turns evil, murdering her foster mother.  Michael, meanwhile, is turned into Swiss cheese by a combination of heavy armaments and falls down a mineshaft, to be buried alive.

If only they could have left it there, things would have been perfect.  Instead, we return again, this time with a jumble of half-formed ideas that can't overcome tiresome characters and rote carnage.  It is little more than a sad attempt for the series to stay relevant at a time when even the Nightmare on Elm Street movies, as creative as they got sometimes, were wearing out their welcome and slashers were becoming nothing more than self-parody.  Halloween 5, unfortunately, was not an exception.

Instead of dying, Michael Myers (Don Shanks) finds a back entrance that leads to a river.  He floats down it a bit before making his way out and into the hut of a hermit (Harper Roisman) who takes him in and nurses him back to health.  Michael wakes up on October 30 of the next year, kills his benefactor and heads off to visit his niece.  Meanwhile, Jamie didn't kill her foster mother, and wasn't truly evil.  Rather, Michael controlled her mind, making her do it.  The experience made her mute, and she has been remanded to a children's home for treatment, though she still receives regular visits from her step-sister Rachel (Ellie Cornell) and her friend Tina (Wendy Foxworth).  She also is visited regularly by Dr. Loomis (Donald Pleasance), who has realized that the psychic connection Jamie has with Michael may finally lead him to his nemesis so he can kill him once and forever.

The psychic link doesn't do too much, as Michael starts slicing and dicing throughout the town again.  However, this time it's the usual batch of annoying teenagers, including the joker, the bad boy, the free spirit and the "fallen woman."  He also gets to massacre more cops before a final showdown with both Loomis and Jamie in his old house as they try to make sure they end his reign of terror forever.  Unfortunately, it seems Michael has a benefactor in a mysterious Man in Black (Shanks), who has a runic tattoo on his arm similar to one that Michael has.

Donald Pleasance, who was amusingly over the top but integral to the last chapter, is given little to do this time around other than spout exposition and look tired.  Danielle Harris still shines when she is given something to do but, like Pleasance, she is largely put on the back burner as well.  Still, when she does finally get to do something, it is the highlight of the movie.  She is pursued throughout Michael's old house before getting stuck in a coal shoot while trying to hide from him, with dire consequences.  She also briefly manages to illicit a bit of humanity from her uncle.

Everyone else that is top billed for the most part gets killed early on or makes little more than a cameo.  Too much time is spent with Tina and her boyfriend Mikey (Jonathan Chapin), even if it does lead up to one of the creepier moments in the film when she gets in the car with the wrong Michael.  Tina and her friend Sam (Tamara Glynn) are particularly grating, especially when they spend half their time skipping around town and squealing.  Spitz (Matthew Walker) is the jokester character, and he is, as can be predicted, unfunny and annoying.

So, since we have a bunch of people we want to see Michael kill from the first moment they open their mouths, you would think that we could at least get some satisfying over-the-top gore out of this.  Unfortunately, since the MPAA was on the warpath over movies like this, we don't even get that.  A death by scythe is largely in the shadows and off-screen, while an entire SWAT team being massacred (which was actually filmed) is sliced out of the movie all together.  Considering how much better this chapter could have been (other than just leaving well enough alone and not making the movie in the first place) if it had the original concept of Michael and Jamie becoming an unstoppable killer duo, the fact that anything that would have been of interest to someone seeing a horror film was left on the cutting room floor is just a further insult.

Then, on top of it all, is the Man in Black.  Here are the roots of the Druid curse plot, but no one mentions it - just some guy walks around in steel-tipped pointed shoes, kicks puppies and scares people, before being Michael's deus ex machina in the end.  One more bit of supernatural mumbo jumbo added to a series that, while he seems pretty hard to kill, had for the most part been firmly rooted in the fact that Michael was just a tenacious serial killer.  The psychic link was one of the weaker parts of Halloween 4, and doesn't do anything here accept to have cops running all over the place.

Halloween 5 failed miserably, ending up going straight to video in a number of countries.  It was quite obvious to fans, and maybe even dawned on Moustapha Akkad, that they had pushed it one movie too far.  It is no surprise that it was six years before we got another installment and, unfortunately, more explanation about Michael that no one ever asked for.