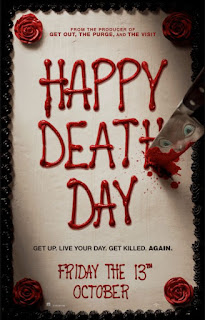 There are fewer ways keep me from seeing a horror film than to slap a PG-13 rating on it.  What the rating typically means to me is that at some point a studio executive decided that they wanted to get the kids in, cut out almost everything interesting and dumped another steaming pile of trash into the theaters when they knew another Marvel film was coming out.  Since horror is usually on the low budget side anyway, there's a chance of making a little cash, but if it is too bad of a movie the upside is no one will get to see it.

Happy Death Day seemed a little different.  It got a decent promotional push and, despite the rating, looked interesting.  At least it was the kind of plot that could still be enjoyable regardless of the amount of blood being spilled.  Still not enough to get me to shell out theater prices for, but it stayed on the back burner.  I kind of wanted to see where it too the concept, especially since the excellent series Russian Doll came out not too long after with a similar premise, but just not as a slasher film.

Tree Gelbman (Jessica Rothe) wakes up in a strange dorm room with a guy named Carter (Israel Broussard) with no memory of what happened the night before.  She does the walk of shame back to her sorority house and goes about her day being the waste of space she is: being mean to her roommate, making fun of another girl's weight, sleeping with her married teacher and heading off to a party to get with a friend's boyfriend.  Her routine, however, is rudely interrupted by a masked killer who taunts and then murders her.  Not the best way to spend your birthday.

That would normally be the end, but she wakes up back in the same dorm room.  She soon starts to try to work out who the killer is and figure out how to survive until the next day.  Along the way she starts to realize what an awful person she has become and endeavors to change.

Happy Death Day unabashedly references Groundhog Day, making no bones about its influence.  Part of that is an awful person coming to self-realization and changing their life around.  On this matter Happy Death Day is unbelievably clumsy.  While in Groundhog Day Phil slowly evolves into a better person, Tree suddenly has a revelation.  There are some different rules on how the returning happens, so that may have had something to do with it, but it just seems to happen too quickly.

Otherwise, it makes for a good take on a slasher film.  It helps that it doesn't take itself too seriously and, though it lacks a series of inventive kills, I think getting too creative would have ruined the vibe it was going for.  The true killer would not have been that inventive in how they killed anyway given the circumstances surrounding their motives, so it would just have been a lot to explain.  And, if I haven't emphasized this enough in a number of reviews, explaining things in a horror film often ruins any sort of effect it has.

The good thing is that after Tree starts deciding to be a decent person Jessica Rothe becomes a bit more believable.  When I went to college fraternities and sororities were a completely alien thing to me; I was working a full-time job, paying my own way and hanging out with a mixed bag of people with a variety of life experiences.  Not to mention that the houses made such a problem for themselves that they were ultimately removed - physically.  Still, they exist on certain levels, and they still had their reputation.  Tree and the head of her house Danielle (Rachel Matthews) are introduced as such caricatures that it can't help but look like acting, and pretty bad acting at that.  Once the need to be a character is gone she seems to be more at ease in the role.

Israel Broussard gets to be the good guy, but is in the movie a lot less than you would expect, given that these scenarios often need an anchor character to explain the situation to multiple times.  Still he's solid, if unremarkable.

Where many horror films fail is the ending and, though in some ways Happy Death Day has a satisfying one, it still follows the Hollywood tendency of everyone getting to go about their day after a homicide.  Self defense or not, police still typically have a lot of questions, especially if you start going on about time loops (which I'm assuming maybe Tree was smart enough to keep her mouth shut on that one).  The movie was still a lot more fun than I expected and, since it largely is tongue-in-cheek to begin with, it seems like nitpicking when it comes to some of the issues.

Also, despite being PG-13, director Christopher Landon decided that maybe there should be a little blood.  There is still more in your average episode of Supernatural, but you can't always have your cake and eat it, too.