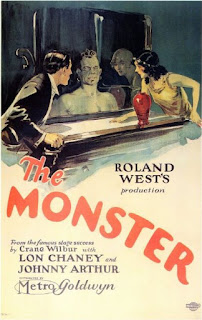 It is a pity which films have been randomly lost.  A large portion of the early years of cinema is gone, either through neglect or just the fact that film had a habit of combusting at the time.  Censors and other people who enjoy butchering art have also had their way.  In a lot of ways it is a miracle we have what we do.

Unfortunately, what we do have is not always the best.  Take Lon Chaney for instance.  For every Phantom of the Opera we still have, we are missing something like London After Midnight.  It also means that lesser films, like The Monster, have also managed to survive.

The town of Danbury, Indiana is shaken by the disappearance of one of its wealthier farmers.  The local mercantile puts up an award, leading to a visit from a detective from their insurance company (William H. Turner).  The store’s under clerk (Johnny Arthur) finds a clue leading him to believe that it may have something to do with a local insane asylum thought to be recently abandoned.  Of course no one listens to him until he, his love interest Betty (Gertrude Olmsted) and the head clerk from the store (Hallam Cooley) get captured by the e denizens of the asylum.

It turns out that a certain Doctor Ziska (Lon Chaney) is looking to do experiments on all of them, especially Betty.  The three must use their ingenuity to escape Ziska’s grasp and Free themselves and others the mad Doctor is keeping imprisoned.

One of the problems with The Monster is that, while nominally billed as horror, it is largely a slapstick comedy.  A bigger problem is that almost every joke falls flat.  The characters are all stock from better comedies of the time and the jokes seem to be stolen from them as well.  The whole affair seems that it was contrived for a better ensemble, a feeling that is enhanced by the fact that Lon Chaney’s role is just slightly more than a cameo.  He’s still the shining light in everything, but even he seems to be phoning it in.

The movie does have some nice atmosphere in places and an actual menacing henchman in Caliban (Walter James).  Unfortunately it is more dull than anything else and far from a great example of Chaney’s work.