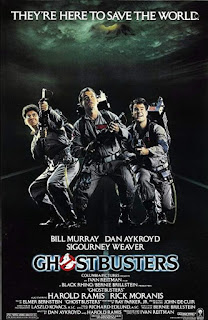 The second season of Stranger Things saw the kids dressing up like the Ghostbusters.  Other than the fact I would have liked to had the money and the time to make those costumes I would have loved it.  It would even be nice to buy them; I don't remember them on the market, but if they can be found in rural Indiana, then I am sure I would have found them in Phoenix.  Not that I would have had one anyway; 1984 was not a good time economically, something that Stranger Things tends to gloss over a bit.

I mention this because after rewatching this movie after about 15 to 20 years, I realize just how rooted in the '80s it is.  I am not talking about the obvious, like the music, clothes and hair, but just how you had to be there to get some of the references.  There is plenty for any generation to enjoy, from special effects that, except in a few cases, hold up today, to a lot of humor that avoids the politics of the day.  When it does make reference it's not enough to distract from everything else that is going on.

It also got me thinking of when I was a child and first saw this.  My parents took me, of course, but I also saw it again later in the year with a bunch of friends.  Seeing a movie more than once, especially when you and most of your friends were lucky if your parents could afford to take you in the first place, was a treat.  And it was an important treat.  Even though the second time I saw Ghostbusters was probably sometimes in late July or early August, it was still in first-run theaters.  Not on the main screen for the new movies, mind you, but definitely not on the postage-stamp sized screen in the broom closet that was the last refuge before the film was dumped in the dollar theater.

Movies tended to stay in theaters a lot longer at the time, as studios wanted to get what they could before it would go to cable.  It wasn't a given that the movie would be on HBO the following summer.  Rather, there was a good chance you were going to have to wait a while, as the movie studios made sure that cable did not compete with what was in the theaters.  It was even longer before you would get it on one of the movie channels after VCRs became available.  And, again, if your parents couldn't afford to take you to the movie, it was guaranteed they couldn't afford the premium channels on cable.  When VCRs became cheaper, and rental places popped up, they were a gift that kept on giving.

This all goes to say just how huge this movie was when it came out.  The theme, the quotes, the cartoons and merchandising that followed - it rivaled Star Wars, which as far as most of us knew was finished at that point.  It was a cultural phenomenon that lasted through most of the '80s, and even outlasted the stain of mediocre sequel.  It has outlasted Harold Ramis, who not only played one of the main characters but wrote the script.  For 35 years news has popped up again and again of a proper sequel, which it seems might be on its way, despite the fact that, save the Saturday morning cartoons, little of anything good has spawned from it later on.  It was a magical moment of filmmaking from the 1980s, and attempts to recapture that magic have fallen flat, or just never materialized.

It remains a totem to the '80s, smelling of hairspray and glowing in the light of its bevy of neon ghosts.  It also remains enjoyable to this day despite how much it is stuck in the decade from which it came, and despite the recent efforts of the the usual finger-waggers trying to tell us why we should hate this movie.

Doctors Peter Venkman (Bill Murray), Raymond Stantz (Dan Aykroyd) and Egon Spengler (Harold Ramis) are part of the parapsychology department of an unnamed university.  Due to their methods (or, should say, largely due to Venkman's screwing around) they lose their grant and are ejected from the campus.  Still, right before this happens, they run into proof of the supernatural, and develop a way of trapping ghosts.

While customers are not exactly lining up at their door, and Venkman's attempts to hit on a musician named Dana Barrett (Sigourney Weaver) who comes to them for help with supernatural occurrences in her refrigerator doesn't help things, they soon find themselves with more than they can handle as it seems New York is seeing a rise of in the number of hauntings.  With their storage unit and workload almost to capacity, they hire construction worker Winston (Ernie Hudson) as an additional member.

Problem is they not only have to contend with ghosts, but also with an angry bureaucrat fro the EPA (William Atherton) and the fact that he goings-on in Dana's fridge is just the tip of the iceberg as ancient Sumerian gods attempt to force their way into our dimension.

While I admit that I didn't laugh as hard as I used to, it's also because I remember (and have heard quoted) so many of the jokes from this movie over the years.  I figured after all this time I would have forgotten quite a bit, but in truth this is not a forgettable movie.  The things that amused me the most were the things that I had almost forgotten about, such as a lot of the behavior of Louis Tully (Rick Moranis) while he is possessed.

One thing I did feel different about was how the movie was put together.  I could have sworn there was much more story to it, and much more of the guys bonding.  Seeing it now I realize how much of it was improvised, and how a good deal of it feels like a series of skits held together by a couple story threads - the threat of being shut down by the EPA, and Dana's possession by Zuul.  It may be the fact that these actors had worked together for so long that it just was taken for granted that the bond was there all along.  Winston, unfortunately, always ended up being the odd man out, not even appearing on the posters, but he still gets some of the best lines (and, thank goodness, they're the usual ones you would expect a black actor to get in the '80s).

Many of the effects have aged well, from the ghost effects to the beams shooting from their proton packs.  Every now and then something doesn't look right, like when the Keymaster pursues Louis through the apartment building in its beast form.  The stop-motion is great, but in the end it wasn't integrated well with its surroundings.  From what I have read part of the problem is that the studio was wanting to rush the movie into theaters, and some of the effects were not finished to director Ivan Reitman's satisfaction.  Still, what we did get influenced a number of movies to come.

Ghostbusters was never supposed to kick off major franchise.  Stripes was the same humor, director and most of the same cast, and it managed to be a major hit without being saddled with a sequel.  Because the movie became so big it was inevitable, even though Bill Murray for the most part was correct in his attitude that the first should have been the only one.  He was willing to move on, as were most of the cast, but the public never was.  As it stands this movie seized a golden moment, came out at just the right time and managed to hit the right note of escapism in a period of time where everything looked dire.