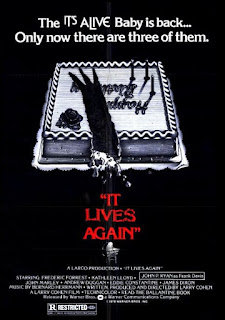 There are some things where you just have to explain that they are a product of the decade in which they came from.  Other than the fact that remakes are really just cash-ins and rarely better than the originals, the failure of a modern remake of It's Alive was a given.  In fact, I'm not even sure many people are aware there even was a remake.  Even with the the almost overburdening attention paid to proper childbirth and child rearing these days the fear of being saddled with a "special" child is not a overwhelming.  There is so much that can be done now, and so much more understanding, than there was nearly 50 years ago.

And that is what the original It's Alive was.  Genetics was still little understood at the time, but the fears were there that a baby may not come out completely normal.  Add to that people starting to realize what kind of gunk was being pumped into our atmosphere, dumped into our rivers and generally contaminating our ground, the fear of outside forces influencing how children may turn out became more of a concern.  Not to mention the base fear that many parents have about whether or not they are doing their best for their child.  After centuries of raising kids a certain way, books and doctors began telling everyone they were doing it wrong.

Enter Larry Cohen, exploitation director extraordinaire, to run with those fears.  It's Alive, with its killer baby and a handful of classic scenes, did what it was supposed to even if it was quite a mild film for its subject matter and, for that fact, Cohen.  Still, it made money on a small budget, and the ending left it open for a sequel with the announcement, after the Davies' baby is shot down by police, that another one was born in Seattle.

We skip ahead a few years and find John Davies (John P. Ryan) now working with a group of scientists to keep the mutated children alive and study them.  Meanwhile, the U.S. government, in conjunction with local law enforcement and the cooperation of doctors around the country, has been working hard to destroy the infants whenever they are born.  Davies expects the next one to be born to Eugene (Frederic Forest) and Jody Scott (Kathleen Lloyd), a Tucson couple that are not too happy about the news.  On the other side, a man named Mallory (John Marley) is watching them.

Eugene thinks Davies may be crazy, but his fears escalate when they arrive at the hospital to find out the entire Tucson police force is waiting for them.  Frank manages to force Mallory to let the couple go, and the baby, after being delivered, is taken to a secret lab in Los Angeles.  Jody is left in Tucson to recover, but soon joins her husband, as does Mallory and Det. Lt. Perkins (James Dixon), who dealt with the first baby.  The arrival of the police triggers the Scott baby, as well as the two others being held at the facility, to go on a killing spree, and the Scotts are eventually used as bait to stop it.

It seemed at first that Cohen had a good idea of where he wanted to take the movie, but soon after arriving in Los Angeles things begin to stall, before ramping up briefly to its inevitable end.  We do get to see more of the babies this time, but still not enough for them to look too fake (always a concern with a low-budget film).  John P. Ryan is a welcome return as the shell-shocked Ryan, while John Marley is a sympathetic antagonist.  James Dixon, unfortunately, has more of a cameo role than anything.

That leaves Frederic Forest to carry much of the movie, and I found him extremely annoying.  Kathleen Lloyd manages to do a decent job, but Forest overemotes, and not in a hilarious way, but rather in a whiny unsympathetic manner.  It may be the way Cohen wrote the character, as Eugene I believe would be annoying either way, but Forest doesn't do the role any favors.

As for what audiences came for, which was to see people getting ripped to shreds by killer babies - well, once again, prepare to be disappointed.  This sequel is even less violent than the original.  There are barely any gore effects, with most killing going on off screen.  There is more tension built in waiting for the Scotts' baby to be born than there is after it comes into the world.  If you are going to do a movie about killer babies, especially in the 1970s, then it should be expected that you get as nasty with it as you can.

While it is not a surprise that the original got a sequel (although it is a surprise that a third one got made almost a decade later), Larry Cohen unfortunately dropped the ball.  This one is watchable, but it was an opportunity to just go overboard on everything that could make a movie like this great.  Unfortunately, he held back, giving us barely likable characters and not much excitement.  The fears about genetics, poisoning and bad parenting are also put on the back burner, so it also misses an opportunity to continue to exploit those for a decent horror plot.  It's a sadly missed opportunity by Cohen to surpassed his original.