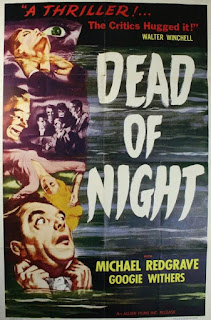 Ealing Studios is well-known for their comedies and crime capers.  They were one of the major post-war British studios, featuring a number of movies that are considered classics today.  Although occasionally some Gothic elements creep into Ealing films, they only did one horror film, Dead of Night, and it proved to be groundbreaking in many different ways.

Dead of Night is an anthology of stories with a wraparound, something that would become more popular in the following decade, largely with American, British and Italian filmmakers.  They present a way of making money on something that usually doesn't - short films.  Shorter films typically play well in art cinemas or as a way of showing the talent of a director, but it is hard to fit them in when most people are going to see feature-length films.  Anthologies largely fixed this, and when it came to horror it often gave directors known for their more serious work a chance to do genre films without having critics wringing their hands.

Walter Craig (Mervyn Johns) is an architect called to a country estate to see about doing some reconstruction work.  When he arrives he realizes that the estate, and everyone in it, are all part of a recurring nightmare he has been having.  The others find it fascinating, and start relating their tales of the supernatural.

Race car driver Hugh Grainger (Anthony Baird) recalls how, while recovering from an accident, he had a vision of a hearse that later saved him from death.  A young girl named Sally O'Hara (Sally Ann Howes) recounts her strange encounter with a little boy in an old house during a Christmas party.  Both of these are quick tales, but afterward they get more detailed.

Joan Cortland (Googie Withers) tells the story about a haunted mirror that came between her and her fiancee Peter (Ralph Michael), while Craig's host Eliot Foley relates a story he knows about a golfing (and romantic) rivalry that continued beyond the grave.  Finally, Dr. Van Straaten (Frederick Valk), a psychologist who has voiced doubt throughout the proceedings, tells of a strange case he worked that involved a seemingly possessed ventriloquist dummy.

While the first two tales go by rather quickly (and seem to be setting the tone for the rest), the longer ones could easily be early drafts for The Twilight Zone.  In fact, I could have sworn I have seen a later remake of "The Haunted Mirror", or perhaps read the story on which it may have been based.  I do like how the movie paces everything, from the introduction of the characters and getting the slight stories out of the way before the impact of "The Haunted Mirror", as too many later anthologies tend to put the worst stories toward the middle.  In this case the more comedic story about the two golfers vying for the same woman is perfectly where it belongs (and was stupidly cut out of early U.S. versions of the film), giving some relief between the two headiest pieces.

As usual, besides the back-of-the-conscious fear of mirrors many people have, the other memorable segment involves a ventriloquist dummy.  Whenever I see one of these segments I always start thinking about how many times we have been down this road, but for some reason it always comes up fresh.  This does have a different ending than either of the popular episodes in The Twilight Zone or the Friday the 13th television series.  Let's just say there's a reason most of us find a jalapeno on a stick much less nerve wracking than something like the dummy Hugo Fitch in this segment.  The uncanny valley is not a place many of us enjoy spending our vacation.

For once also the linking story is fine as well.  There are some hints of how it will turn out, but it does one better in the end.  It's quite creative and does what I wish more supernatural tales would do: forego explanation and just leave the audience with a sense of uneasiness as the credits roll.

Although there are four different directors credited I didn't really notice too much difference between them.  It wasn't as jarring as seeing the different styles Spirits of the Dead, for instance.  The "Golfing Story" is a bit of an exception, being closer to the typical Ealing comedy style (the characters themselves being a reference to some side characters in Alfred Hitchcock's The Lady Vanishes), while the linking story and the other horror pieces tend to use the black and white format wonderfully with plenty of play between light and shadow.  This is most well-done in "The Haunted Mirror", as it contrasts the 19th-century paneled room Peter sees in the reflection with his modern, sparse accommodations of limited tones matched with curves and angles.

I understand there are viewers that may find Dead of Night to be quaint or old-fashioned, and in some ways it is.  It certainly shows its budget in places, which is no surprise considering this was being made within a short time after World War II ending and being almost immediately rushed to the theaters. I would say that without it some of the best anthologies, like Mario Bava's Black Sabbath or the better ones we got from Hammer or American International, would not have been made.  Dead of Night proved the format marketable, and even to this day we have it to thank for Black Mirror, Love, Death and Robots and countless other anthology series that have recently come back into vogue.