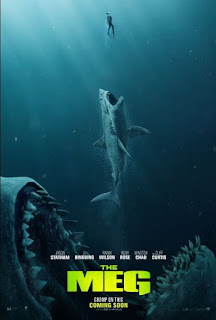 It's strange to watch this movie so soon after a recent South Park episode called out Hollywood for pandering to the Chinese market (to the point where movies are scripted and re-shot to avoid annoying their thin-skinned government).  I know a lot of films, usually if they happen to have robot cars fighting or star Duane Johnson, are not made for U.S. audiences any longer, but count on the fact that lots of noise and pretty lights will satisfy an international audience that couldn't care less about the dialogue they have to read at the bottom of the screen.

The Meg, after floating around Hollywood for years, doesn't even bother to pretend.  It's Jaws rebooted to be louder, bigger and less scary.  With the research facility (rather than a resort, but still so much glass) and the acting it could even be said to have a healthy dose of Jaws 3D as well.  It's a soulless exercise in filmmaking, which, though largely a failure in the U.S., once again was able to edge out its break-even point by kowtowing the People's Republic.

Jonas Taylor (Jason Statham) is a deep-dive rescue expert who is called back into action when an experimental sub gets trapped in an unexplored part of the Pacific Ocean after being attacked by a large creature.  While some of the team are reluctant to bring him on because he has lost some people in the past, he proves able to save most of the people on board and get them back to the research facility safely.  The facility, Mana-One, is funded by billionaire Morris (Rainn Wilson) and run by oceanographer Zhang (Winston Chao) and his daughter Suyin (Bingbing Li).  For whatever reason Suyin's eight-year-old daughter Meiying (Shuya Sophia Cai) is also taking up space on board.

Jonas recognizes the attacker as a megaladon, a giant prehistoric shark thought to be extinct.  While they think they have escaped, the thermal layer that keeps the megaladons in their own environment is briefly breached, allowing the giant shark access to the main ocean.  It immediately goes about looking for prey and attacking anything that gets its attention, including several ships.  It's now up to Jonas and the rest of the crew to get rid of it.

The movie largely plays out like Jaws, just trying to be bigger, and failing at every turn.  There is no tension, almost no chemistry between any of the characters (despite trying to force a romance between Jonas and Suyin) and, because it is PG-13, no willingness to even take chances that Jaws did.  It sets itself out to be a monster movie, but it is hard to be scared of a monster that has to play nice so the kids can get in to see it.

A major part of the problem is director John Turteltaub.  From what I have read one of his first concerns was what kind of roar the shark would have.  When you have that sort of disconnect and lack of intelligence in the person behind the camera, this is the type of thing you get.  It's no wonder that every character has trouble staying on a boat or even standing up straight in a number of instances.  It's not surprising since this is the guy who has given us the National Treasure movies.

It needs special mention that Jonas, being an alcoholic, suddenly goes cold turkey while he's at the research facility.  In reality he would be starting to experience the first symptoms of withdrawal, and would be one of the last people I would want operating any machinery.  But, by the magic of Hollywood, he's clean and sober as soon as he needs to be. I know that we shouldn't be expecting too much reality from a giant shark movie, but keep in mind in other scenes there was enough research done to, for once, not pull something out of a person when it gets embedded in them and to not have a giant shark overly concerned with human-sized prey (except when the script calls for it, of course).

That doesn't mean Jason Statham does a bad job.  He's put into big, dumb action roles, and he would probably be in better (or at least more memorable) movies if this was the 1980s.  Everyone else is merely serviceable, and once again we have a child thrown in for no reason other than to just be there.  This time around they don't even put her in danger, but just have her around being cute and precocious, which is annoying enough.  Since this is a Chinese co-production the billionaire, of course, dies violently, since capitalism, at least the Western version, is still technically evil.

From the previews I remember seeing (the megaladon leaving its tooth marks in the glass of the research station), I guess I was expecting more than just another Jaws knockoff 40 years after Hollywood left off doing Jaws knockoffs.  I really didn't even know it was a Jason Statham movie or to what degree that I wasn't even in the target audience for it - since I usually assume I am the target audience even for bad monster movies.  It isn't even campy enough to be a Deep Blue Sea.  It's just there to once again recoup a little bit of cash from foreign audiences for a movie industry that seems to be actively trying to kill itself off.