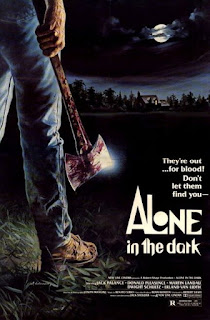 By looking at the poster of this movie you would assume that we have another slasher along the lines of Friday the 13th, with an ax-wielding maniac making steak tartar of annoying teenagers and a few adults along the way.  It was certainly released at a time when these movies were becoming increasingly popular, so what would one more movie with an unstoppable killer (or killers, since it says they) have to offer?

The truth is the poster has nothing to do at all with Alone in the Dark.  I am halfway convinced this was rejected art for another movie poster that New Line Cinema came across and slapped the a name, tagline and cast and crew information on.  Wouldn't surprise me, as this movie was the first in a number of ways: New Line's first, director Jack Sholder's first feature length film and the first horror film to be released in Dolby Stereo.

Once Alone in the Dark got going I am sure that no one really cared that the poster was a bit of a trick.  This is because rather than another trip back to the well (or summer camp, or deserted school, or sorority, etc.), it was something completely different and much better than one would expect.

Hawkes gets it into his head that Potter killed their former doctor to take over the position, and convinces the other three that they must kill Potter if given the chance.  The chance comes when a blackout causes the electronic security measures at the hospital to fail, and the four escape during the ensuing chaos and rioting, soon laying siege to the Potters' home.

If the name Jack Sholder sounds familiar, it's because he directed the infamous A Nightmare on Elm Street 2: Freddy's Revenge.  It was largely because of this movie that he got to do the sequel, and unfortunately it turned out to be one of the worst in he series.  This movie and The Hidden better show off his talents, as he does know how to build tension from subtle, unsettling situations and make a handsome-looking film.

It also helps that he has a host of character actors, all of whom are top-billed above the central character of Dr. Potter.  Jack Palance largely gets to look tough and menacing, but when he is given material to work with he's fantastic.  He makes Frank Hawkes seem genuinely disturbed, and not just in a typical Hollywood way.  Although it is made clear by Sholder that the psychiatric views expressed are bunk (and were unfortunately based on some real theories), Hawkes is clearly confused by the reality he concocts and that with which he is confronted.

Martin Landau gets to do the over-the-top acting, screaming Bible verses and attempting to murder almost everyone he comes in contact with.  Erland van Lidth is significantly creepy, especially when he meets Lylah alone in the Potters' home while they are away.  As for Phillip Clark, he gets to don a hockey mask the same year a certain other killer decided that it was a good look.  Alone in the Dark was released only three months after Friday the 13th Part III, so I'm not really sure if this was a direct reference or merely coincidence.

As for the good guys, it is tempting to say this is one of Donald Pleasance's oddest or worst roles, though I think he's playing Leo Bain exactly as Sholder wanted.  He's a pot-smoking hippy type with far-out, and frankly dangerous, theories on how to deal with mental illness, and often it's questionable if he might not be one of the patients himself.  Dwight Schultz doesn't really get time to develop Potter prior the attack on his family, but he does take the time to make him realistic during the attack, being completely out of his depth.  He is not portrayed in any judgmental way, and in fact in the end does what he need to survive and protect those he loves.

While the siege does get a bit tiresome at times the horror elements of Alone in the Dark largely work, often because Sholder's writing and direction takes Bain's words to heart, presenting a world where the actions of the supposedly normal people (going to clubs playing violent music, rioting at the first chance during a blackout) aren't that far removed from the patients in the mental hospital.  In fact, most of them seem content where they are, and even the Bleeder seems to have different motivations than the others.  Most of the "insanity" presented is still the Hollywood version of mental illness, meant to make people frightened of those that are different, but this time around it also serves to make them frightened of everyone else they may come in contact with.  It may be trying to push the same ideas as it comes to an end, but that is where the film suddenly trips and stumbles, leaving an unsatisfying denouement.  Also, the twist in the film during the siege portion can be figured out about 20 minutes previous.

I would still recommend this as a good alternative to the usual slasher fair that the poster alludes to and that was all the rage at the time.  It is also nice seeing a group of character actors that are no longer with us being gathered for a genre flick that is outside of what they were known for.