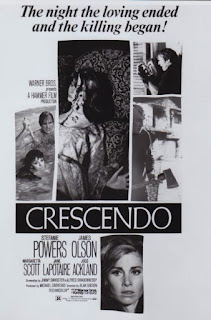 I would hesitate to say Hammer Studios was ever really concerned about making high art.  The fact they became a classic name in horror is more the happy accident of Peter Cushing and Christopher Lee being consistently in their top films as well as feeding the need to update classic monsters with a bit more blood and sex that was in line with the changing times.  Although moral activists and some critics wrung their hands wondering what this all meant and where society was going, it took just over a decade to start making Hammer look old fashioned and tame.

They sputtered on into the early 1970s, still with Dracula, Frankenstein and occasionally Dr. Jekyll or the Mummy.  They tried to add more sex and violence, but budgets got lower and scripts more outrageous.  It didn't help that there were directors out there with even lower budgets that were managing to do the genre better.  It also didn't help that, along with feeling out of step with the times, their non-monster films had begun to run over the same well-tread ground.

They did have a little life in them, and it typically came from thrillers and other horror films that didn't fit directly into their canon of monsters.  Still, the well had to run dry at some point, and few times do we get as dry as Crescendo.

Susan Roberts (Stefanie Powers) has been invited to France by Danielle Ryman (Margaretta Scott), the widow of a famous American composer.  Roberts is doing her thesis on his music, so the opportunity to study his manuscripts and learn more about him from his family is invaluable.  Also living in the villa is Ryman's son Georges (James Olson), their made Lillianne (Jane Lapotaire) and butler Carter (Joss Ackland).

Susan at first makes herself and home and is thankful for Danielle's hospitality.  She also strikes up a quick friendship with Georges, an ex tennis player now confined to wheelchair.  As the relationship starts to move on from friendship, a number of family secrets are revealed.  Also, Lillianne sees Susan, who bears a resemblance to Georges's ex lover Catherine (Kirsten Lindholm), as a threat to her plans with Georges.  On top of that, there are other, more dangerous secrets being kept behind locked doors.

Crescendo is a barely disguised remake of a much better Hammer film, Scream of Fear, made less than a decade prior.  Both feature an older woman with nefarious plans, a young lady being gaslighted, creepy servants and occur in one location.  In both cases it happens to be a French villa.  Where Scream of Fear is quite intense and keeps the viewer guessing about the mental state of its protagonist, Crescendo fails to build up any suspense until one of the characters is murdered at the beginning of the last third of the movie.  There are a few red herrings as to who the murderer is, but alas there are only so many possibilities with such a small cast.

That said, there are some strange dream sequences (especially at the beginning) that occasionally keep things from getting too dull, and the acting generally is on point.  Still, it feels more like a stage play.  There are a few location shots, but the majority of it takes place on an obvious soundstage, and even the way the villa is arranged looks like they just redecorated from Scream of Fear or a dozen other Hammer productions.  With a few exceptions (one being an attack on a door with an axe that may have had some influence on Stanley Kubrick's version of The Shining) the camera work is restrained and barely interesting.

What you are seeing with Crescendo is the last gasps of the studio's heyday, as they were about to sputter to a stop over the next few years and completely vanish by the end of the decade.  It wasn't all bad, but films like this didn't help.  They just made Hammer look old, and like it was made for another generation.