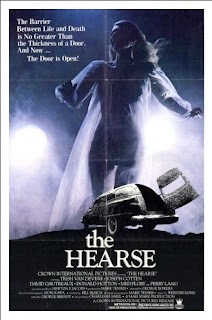 I seem to have a thing for killer cars, and I know I'm not the only one.  Christine is one of my favorite Stephen King novels (even though I'm a bit lukewarm on John Carpenter's film adaptation).  The Car, as silly a b-movie as it is, has been a favorite of mine since childhood, as was Steven Spielberg's Duel.  One of the most interesting things about The Kingdom was the phantom ambulance that showed up at the same time every night.

All this means that if you then give me a movie called The Hearse, then of course I'm going to want to check it out.  If Satan can cruise around the desert in a black car then things have to be even better if we have a full-on hearse.  People seem to get the heebie-jeebies around the things, especially the classic all-black ones.  Perhaps that's why so many look like white limousines today instead of something the Munsters would cruise around in.

Happily, or unhappily for heroine, we have the traditional black coach, and it's quite impressive.  It's a Packard, which had been long out of business even in 1980, so that makes it that much more unsettling.  Unlike many movies with a car in the title, we also get a driver with this one (Dominic Barto) who menaces for Jane Hardy (Trish Van Devere) even out of his vehicle.  That potentially makes things a bit more frightening; even the truck driver in Duel tended to not go far from his rig.

Still, despite the name of the movie, the hears itself is just one element in what is essentially an old-fashioned ghost story.

Jane has just gone through a divorce and a nervous breakdown, followed by the death of her mother.  She has inherited a house in the small East Coast town of Blackford that used to belong to her aunt.  The locals are none too happy to have her showing up, least of all caretaker Walter Prichard (Joseph Cotten), who believes the house should be his.  The hearse itself shows up and starts menacing Jane the moment she enters Blackford.

She does find a couple allies.  One is a teenager named Paul (Perry Lang), the son of one of the local shopkeepers, who is smitten with her and agrees to help her out with handyman jobs as no one else will come to the house.  The other is a handsome man named Tom (David Gautreaux), who comes to her aid one night after the hearse runs her off the road.  Jane soon finds herself falling in love with Tom despite knowing little about her.  Besides the two of them the only other person in town that seems to have her best interest in mind is the strange Reverend Winston (Donald Hotton).

Jane soon finds her aunt's diary, and begins to learn why the townspeople act the way they do.  It turns out she had a lover named Robert, for whom she broke off an engagement, and who also made her agree to a pact with Satan for eternal life.  As Jane tries to get settled in it becomes apparent that the tryst between her aunt and Robert had a number of unintended circumstances.

This is a dark film, made mostly at night and using minimum lighting.  It's not one of those situations where director George Bowers was too cheap to order a crew, but it is for the atmosphere.  There are islands of light throughout that represent relative safety (or false safety, for that matter), while every time that Jane enters the dark, whether it be the woods, the highway or an unlit part of the house, things await her.  It's not just a phantom hearse; it seems that nearly every place she goes and everyone she meets has an element of fear, as if the relationship between Robert and her aunt tainted the entire town.

Trish Van Devere herself does a fine job as Jane, constantly trying to make sure the breakdown doesn't happen again while trying to determine what is real and what isn't.  She also finds herself often in her aunt's shadow, although once she starts to truly understand what happens she becomes more adept at fighting back.  Donald Hotton is at times awkward and stern as the preacher to the point where I don't know if his early appearance and seemingly amateurish acting wasn't on purpose.  Worst actor in this, hands down, is Perry King, doing the "Aw, shucks" routine way too much.  Also doesn't help that he looks Jane's age when he's supposed to be about 16.

The clash of acting styles, from barely being able to deliver a line to being subtle and unsettling, may be one of the reasons this isn't a well-liked film.  It may also be that most viewers, like myself, were expecting a phantom killer hearse rather than something that felt like a throwback to the early 1970s.  Personally, despite Perry King, I found the movie to be intriguing enough even if it does leave some unanswered questions at the end.  At least it does have an end that doesn't feel contrived, but at least satisfying from the view of our main character.

The Hearse can be a bit slow in places, but it was meant to be more of a modern Gothic thriller rather than an action film.  Going into it with the expectations of a good ghost story will help.  By the end, though, you will wonder why Jane doesn't buy a good guard dog and a shotgun, as everyone seems to think they're invited into her house at all hours without permission regardless of how scared everyone is supposed to be.