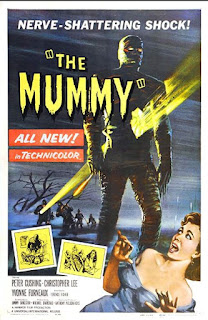 Hammer was a low-budget studio that suddenly found themselves with major hits after The Curse of Frankenstein and Dracula.  Problem was, Universal owned the movie rights to these characters.  The result was that the Hammer versions of these movies were significantly different in both pacing and story.  In a way that was a gift as it allowed their movies to add as much sex and violence as they could get past the British and, as the films drifted across the pond, the American censors at the time.  It also helps that Hammer was quick to start producing the movies in color.

Universal noticed rather quickly as well that creatures they had started treating as a joke a little over a decade previous were now being given a serious revival.  It was only a matter of time before Hammer and Universal came to an agreement so that other characters could be used.  Thus came about Hammer's version of The Mummy.  Still, even with the parent studio's blessing, the Hammer version was still quite different.

Stephen Banning (Felix Aylmer) is on a dig in Egypt in 1895 with his son John (Peter Cushing) and brother Joseph Whemple (Raymond Huntley).  They believe they have found the tomb of the Egyptian princess Ananka, and after a few more days digging verify they have.  As Stephen and Joseph prepare to enter they are warned by a man named Mehemet Bey (George Pastell) not to enter, but of course they do anyway.  While Joseph goes to tell John, who is laid up with a broken leg, about the find, Stephen finds the Scroll of Life and, reading it, brings the mummy Kharis (Christopher Lee) back to life.

Three years later Stephen is still in a rest home raving about what he saw, while John and his sister Isobel (Yvonne Furneaux) have gone about their lives.  However, things change once Bey, after digging Kharis out after John had the tomb destroyed after removing its artifacts, arrives in England.  It turns out that Kharis was buried alive for trying to revive Ananka, with whom he was in love, and made to be her eternal guardian.  Bey goes about using Kharis to punish those who opened the tomb, and John, of course, must stop him before he is the final victim.

The Mummy is kind of a mash-up of both Universal mummies, Imhotep and Kharis.  Imhotep was the one that Boris Karloff played in the 1932 classic, searching for a way to bring his lost love Anck-es-en-Amon back to life, only to find her spirit reincarnated in the daughter of a British governor.  Kharis, meanwhile, spent three movies being fed tanna leaves and doing the bidding of his master.  Character names from both movies are used here, although the reincarnation plot is completely abandoned - although Isobel looks enough like Ananka to fool Kharis.

Christopher Lee mainly ends up stumbling around, largely due to the wrappings they put on him (he suffered a number of injuries in this movie, some from carrying around Yvonne Furneaux and others just because the outfit was so confining) and, because a flashback shows that Kharis had his tongue removed before being entombed, has to do most of the acting with his eyes only.  His only speaking parts are during the flashback sequences showing what happened to bring about his fate.  Despite being a lumbering corpse Lee physically makes it clear that Kharis is unbelievably strong and resilient, frequently smashing through doors and windows to get at his victims.

Peter Cushing plays the hero this time around, trying to keep it together as his family is slowly murdered while helping the local Inspector Mulrooney (Eddie Byrne) in tracking down Bey and Kharis once the preliminaries of getting the officer to believe what is happening are done.  Still, like in the original, the heroes are not really given any dimension, and unfortunately this version does not have a strong performance in either the main or heroine roles to overcome that, despite the fact that George Pastell enjoyably overacts as Mehemet Bey becomes the main villain rather than Kharis.

Ironically, after what Hammer did with Frankenstein and Dracula, I find The Mummy to be more reserved than the original.  It is a good thing it is in color as it feels like it is older than it is, seemingly more like something that would have come out of the 1940s.  Also, the original Mummy was both sexier and more violent.  Terence Fisher still does a great job directing, using Technicolor to his advantage, although having a green neon glow in what is supposed to be an unopened tomb is rather distracting, even if it is somewhat atmospheric.

Like the original there was no direct sequel.  Two other films featuring mummies were made by Hammer, but with different characters, as Christopher Lee had no desire to play the role again.  So, like the Universal film, it stands alone, as Hammer began to concentrate largely on its other Universal-based series.  It was still moderately successful, and even somewhat influential on a more modern take of the story, Bubba Ho-Tep.  Whereas Kharis's attack on Stephen in the rest home makes up a small part of the film, it was obviously enough for Don Coscarelli to run with it when he came up with his own little mummy movie.

While it is still quite enjoyable, Hammer's version should  have taken its cues from the original and made the story more about Kharis (even if he was standing in for Imhotep) and less a typical revenge story.