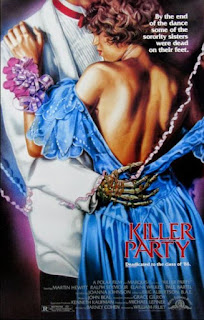 One of the things I like best about '80s horror, especially once the slasher genre started to play out, is that by the mid 1980s it got to the point where they would just throw in everything except the kitchen sink.  Blood everywhere, special effects (usually imaginative as they had to get around low budgets) and big, bad creatures at the end.  Ghostbusters, The Evil Dead and A Nightmare on Elm Street all started this trend, but soon it could be found in films like Prom Night 2.

By the description I read of Killer Party, I was hoping this would be another one of those, even if it was minor and largely forgotten.  And, from what I understand, at some point in its life it was, until everything good about the movie ended up on the cutting room floor to please the MPAA.  What's left, instead of a good horror comedy, is just a horrible comedy with a little horror at the end.

Phoebe (Elaine Wilkes), Jennifer (Joanna Johnson) and Vivia (Sherry Willis-Burch) are pledging to the Sigma Alpha Pi sorority.  Melanie (Terri Hawkes), the head of their sorority, decides to hold the final initiation in the old Beta Tau house, which has been sitting empty every since an accident happened due to a hazing gone wrong.  Jennifer has forebodings about the house, but overcomes her fears.  Still, a dark presence comes over her once Vivia pulls a prank on the other girls to make them think the place is haunted.

Fast forward to April Fool's Day and an annual party, and they decide to hold it in the same house, with Melanie tasking Vivia to set up some of her scares to frighten the fraternity guys.  However, instead of the pranks they are expecting, the angry ghost of the former pledge shows up to crash the party.

A good portion of this is a sub-Animal House comedy filled with fraternity and sorority hijinks. It is not until the last 10 to 15 minutes that the killer shows up, dressed in an old diving suit and carrying a trident, and begins to wreak havoc, murdering everyone in quick succession.  It's then over and done.  Perhaps that's the best thing that can be said is that it is over early, but beside some foaming-at-the-mouth possession stuff, there is really nothing out of the ordinary here.

I don't know if Killer Party would have been any better if director William Fruet hadn't been forced to butcher the film.  As it is, when the killing starts, it's anemic.  The only reason this gets an R rating is a bit of language, since even the little bit of nudity fits within what would have been PG at the time.  It's sad that after wading through so much crap, including Paul Bartel barely getting a chance to reprise the same type of character he played Rock and Roll High School before getting offed, the only head we see roll is a fake one made for a prank.

Rightfully this barely showed up in the theaters before ending up on video.  Even then there were so many better direct-to-video movies to watch that there would have been no reason to waste time with this one.