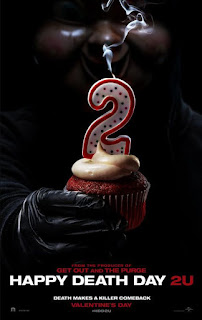 Happy Death Day was a surprisingly fun film, and a decent slasher despite being saddled with a PG-13 rating.  Although there was a bit of the usual Hollywood situation of barely any consequences after someone is killed in a rather brutal manner, it also had a pretty decent ending that wrapped up everything.  However, the fact that the movie was rather profitable meant that there had to be some way of bringing everyone back for a sequel.

It seems that director Christopher Landon, based on ideas from original writer Scott Lobdell, had some ideas on how to do this after making the first one.  In Groundhog Day fashion Tree Gelbman (Jessica Rothe) is stalked by a killer wearing a baby mask (the mascot for the fictional Bayfield University) and continues waking up each day in the dorm room of Carter (Israel Broussard), whom she eventually falls in love with.  She also eventually solves her murder; her roommate Lori (Ruby Modine), after failing to poison her with a birthday cupcake, lets a serial killer (Rob Mello) go free after planting the mask on him, and then goes and does the job herself with the idea that the killer will get the blame.  The motivation is because of how bad a roommate Tree was, as well as the fact they were both vying for the affection of Dr. Gregory Butler (Charles Aitkin), a married doctor and a professor at the university.

That really is a lot more recap than the movie gives as it expects the viewer to already be familiar with the first.  In fact, while I found the second movie to be the superior one, it really doesn't work unless you see the first one.  When combined in viewings it actually improves a lot of the aspects of the first, even if it breaks one of my cardinal rules of not explaining too much.

The explanation for the time loop is doled out quickly, as it becomes central to the new plot.  Ryan (Phi Vu), Carter's roommate and a minor comedic character in the first movie, finds himself in his own time loop with a killer after him.  When he enters his dorm room and says what happens, Tree immediately realizes what is going on.  It also becomes apparent that it was caused by Sissy, a quantum field experiment created by Ryan and two of his classmates, Samar (Suraj Sharma) and Dre (Sarah Yarkin).  When a college dean (Steve Zissis) tries to shut the experiment down a series of events leads to Tree being transported to an alternate dimension, waking up again in Carter's dorm room on her birthday.

At first thinking everything is happening the same way she heads back to her sorority house, but finds out a number of things have changed.  At first certain circumstances encourage her to remain, but eventually she enlists everyone's help to get back to her own dimension.  Only problem is a completely different baby-masked killer is stalking this dimension as well.

One of the best things about this is that we don't have to go through a clumsy procedure of watching Tree become a decent person.  We also see that some of her old selfishness is still evident, which makes much more sense (and, ironically, makes her a more sympathetic character) than a Scrooge-like situation of waking up one morning as a different person.  Jessica Rothe seemed like she was having a bit of fun in the original, and she gets to have even more this time around, even if a few of the more memorable events are a bit silly.  That didn't bother me as the humor is quite a bit more evident this time as well.

Israel Broussard has more screen time and gets to have more of the hero role that one would have expected in the original.  My thought that he should have had a bigger part in the original film seems to have been spot on as Carter turns out to be a decent guy without being a white knight character, even if alternate dimension Carter has some horrible choices in girlfriends.  Phi Vu gets to be more than a one-note joke; in fact, he is largely the straight man this time around.  It seems his line when entering on Tree's birthday is more an attempt to fit in than just be an idiot.  Landon did some service to the character by making him integral to the plot without adding any ridiculous love triangle or romantic interest for humor reasons.  There is still a part near the beginning that could use some further explaining, but there is a third movie in the works that might go into that, and an ending that hints toward it.

As far as the plot goes, rather than ruining the first by giving the time loop an explanation it served to expand on things.  There is no long, drawn-out mystery to get through, and it allows Tree to evolve as a character even further, as well as letting the series evolve.  We're not retracing our steps this time, and I am hoping that the third one will once again go in a different, unexpected direction.  I also hope that the third one will be the last as already most of the characters look a bit too old to be in college.

All in all this has been a bit of a surprise.  What could have been a rote, almost bloodless slasher has turned into something interesting.  Let's just hope it can hold on to its sense of humor without going completely off the rails - or, if it does go off the rails, it decides to do so in a way that some of the stranger movies of the '80s did.