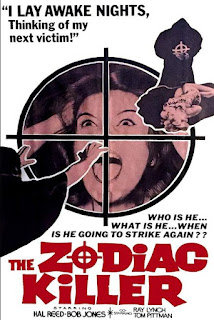 True crime is all the rage these days.  And why not?  Crime rates are actually down, and the types of crimes these shows concentrate on are ones that are probably never going to happen to us.  It works the same way as horror does: it's a safe scare, but amped up a notch due to the fact that it really did happen to someone.  You can feel the emotions for the victim, the fright of ever being in that situation and some sort of fascination about the person who would commit the crime.  It's all from the safety of your own home, since you know the person who did it is behind bars for the rest of their life or died years ago.

But what if the murders are still open cases and the killer has not been caught?

The Zodiac Killer is known to have killed at least seven people around the San Francisco area from 1968 to 1970.  He claimed in correspondence with journalists and police to have killed 37, but the number is in doubt.  He may also have been the one behind a number of other unsolved murders in California and possibly elsewhere.  The main suspect in the murders, who died in the 1990s, was proven again and again not to be the Zodiac, while others, from family members to journalists, have claimed to know who he is.  He may even have been another serial killer that was incarcerated after a number of killings in Ohio.

Although the chances are pretty decent that, whoever it was, they themselves are dead and gone at this point, the case was never solved.  The person behind the infamous murders, though, was certainly still alive when the movie bearing his name was released in 1971.

Early on we are introduced to two men: hot-headed truck driver Grover (Bob Jones) and mild-mannered, and well-liked mailman Jerry (Hal Reed).  Both seem to have different problems with society and with women in particular, although Jerry seems the more level-headed.  When a young couple is murdered in December 1968 at a reservoir, and then another in July 1969, Grover comes under suspicion.  He's quickly dismissed by Sgt. Pittman (Ray Lynch) and Officer Heller (Tom Pittman), who are the lead detectives on the case, but a situation arises in which he claims to be the killer.

This angers the real Zodiac, who has sent notes to various Bay Area newspapers with details about the crimes and strange ciphers for them to translate.  Of course, rather than rage-fueled alcoholic, the killer turns out to be Jerry, who hides behind his warm and welcoming personality with most people but then takes lives on his own time, believing that the souls of the ones he killed will be his slaves in a coming paradise heralded by the rising of Atlantis.  While the police search in vain for clues (even employing a psychic at one point), Jerry gleefully continues his pursuits and reminds us that he is still out there amongst us.

Paul Avery was the man at the San Francisco Chronicle that received some of the letters from the real Zodiac Killer, and he helped make the film and provided some consulting work.  Director Tom Harris had hopes that a contest to win a Kawasaki motorcycle at the film's San Francisco premier would help net them the killer, as they were sure his ego would lead him to show up to see a movie about himself.  Obviously, the tactic didn't work.  Like all good (and bad) exploitation, there was a veneer of doing this for the public good.

That quickly crumbles when it becomes obvious that, although some of his rants before a pagan altar and general details about the killings were taken from the actual cases, many liberties and assumptions were made.  Many of the murders depicted here are made up out of whole cloth and not even connected to some of the unsolved cases that police think may have been done by Zodiac.  The script is heavy on the misogyny (with no real compass of whether it supports and doesn't support the views of some of its characters) and concentrates heavily on the stalking and violence.

Despite its low budget it occasionally has some scenes that would make a slasher movie proud, even if it then shows blood with no puncture marks or the worst fake ear I have ever seen.  It's decently filmed in places, but not expertly, and there is no sense on how to properly edit a film or keep continuity from shot to shot.  I wouldn't be surprised if a good deal of the movie was done in one take.  A good deal of it was done without permits, which allows some of the filming to be done at the murder sites themselves, but in a lot of cases they were probably in a hurry to get out of there before the authorities showed up.

Predictably a lot of the acting is bad.  Bob Jones is hilariously over the top, and Aaron Koslow as the fake psychic (who seems to be disturbed when he has a couple real flashes of the killer) and his entourage (a Russian woman and some German guy with attack dogs) makes for one of those weird exploitation movie asides that is just the cherry on top of a movie like this.  Hal Reed, though, is not bad in his role.  He overdoes it when having to do emotional scenes, but the rest of the time he maintains a cool creepiness that almost makes this take on Zodiac believable, even though screenwriters Ray Cantrell and Manny Cardoza created the character with nothing to go on.  At least it's not the most out there theory on the Zodiac (American Horror Story takes the cake on that one).

Despite any intended good, what we have with The Zodiac Killer is an unabashedly exploitative take on a number of killings that were barely out of the headlines.  If the real Zodiac was at the premier undoubtedly, since he was smart enough not to get caught before this, he was also smart enough not to provide a handwriting sample for a drawing.  Most likely he was unaware the movie was made or, at the least, didn't care.  The blatherings about Atlantis and "slaves in the afterlife" are just the things someone would do to throw everyone off the trail.  Whatever the situation this movie didn't help catch the murderer.  If anything, through its failure to even give he victims names, it glorified him.

Tasteless, cheap and having the slightest acquaintance with the truth that it does, The Zodiac Killer surprisingly works as a proto-Slasher.  If you are looking for a more professional or realistic (at least for Hollywood) account, then it is David Fincher's Zodiac that you should seek out.  If you want some nasty, cheap thrills, then this movie, despite all of its problems, delivers, even if it never had the effect of delivering the real killer to justice.