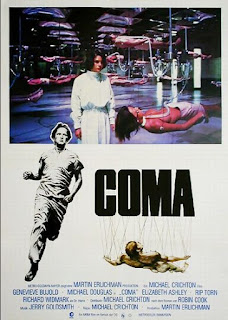 Hospitals figure into many horror films.  Usually the killer has been brought there when they think he's did and starts looking for the protagonist who, conveniently, was brought to the same place.  Other times he's content to reduce the hospital's payroll.  Either way, it's long, deserted corridors with barely-functioning flourescents flickering on and off.  It is always the same way - not a soul around.  Security guards asleep. No nurses making rounds unless they conveniently get in the way of the killer's knife.

The truth is I don't think a masked psycho killer has ever been on the top of anyone's mind when going into a hospital for surgery.  They are generally well-lit and full of people any time of the day, largely because all the bad stuff that happens outside the hospital doesn't keep a time schedule.  The fear most people when going into the hospital is whether or not they will leave.  Surgeons remove the wrong limb, leave stuff inside the patient and, occasionally, something goes wrong with the anesthesia.  The patient just doesn't wake up.

Robin Cook's book Coma took that one step further.  What if someone at the hospital could manipulate situations where this happened?  As long as they were careful and kept it within certain statistical norms, how long could they get away with it?  Why would they do it in the first place?  While Michael Crichton's film adaptation of Cook's novel may simplify things (as it should, since I'm sure some of the medical talk at the beginning threw many in the audience off), it goes a long way toward answering those questions and making the well-lit, constantly busy major hospitals look more threatening than anything the average slasher has come up with.

Dr. Susan Wheeler (Geneviève Bujold) is a resident at Boston Memorial Hospital.  She is on a promising career path, while her boyfriend Dr. Bellows (Michael Douglas) is in line for Chief Resident.  When Wheeler's best friend Nancy (Lois Chiles) goes into an unexplained coma during a routine abortion procedure she begins to ask questions and soon finds out that the hospital has had an abnormal amount of cases of young, healthy patients suddenly going into a coma state during minor operations.  Her poking around puts her on the radar of Dr. Harris (Richard Widmark), who is not too happy about her poking around, especially since it involves illegal access to patient records.

After another patient becomes comatose soon after Wheeler tries to find a pattern.  Her suspicion falls on Dr. George (Rip Torn), the head of anesthesiology, especially after he requisitions the charts on the patients affected and refuses to provide them to her.  She begins to believe more and more that there is a conspiracy, but everyone from Harris to Bellows believes that she is having an hysterical episode.  However, somebody believes her, as she is attacked by a hitman shortly after a potential source dies mysteriously.  Her investigations finally point her to the mysterious Jefferson Institute, where he comatose patients are taken to be stored, where she makes a startling discovery about what is truly going on.

As can be predicted it takes some time for Coma to build, as we're not dropped into an action-packed story right away.  And, yes, some of the medical jargon at the beginning (keep in mind both Robin Cook and Michael Crichton had medical experience) may throw some people off.  Also for modern viewers the fact that everyone figuratively (and, at one point, literally) pats Dr. Wheeler on the head whenever she voices her concern can be extremely frustrating.  I have heard some questioning about why she didn't go to the police after being attacked by the killer, but after being treated like she was crazy by everyone she trusted, I don't blame her.  She instinctively knew that everything would have been cleaned up by the time she got someone to look, so it was no use.

Geneviève Bujold delivers a solid performance, and happily Wheeler (who is alluded to as a feminist in the movie but, from what I understand, closer to what we are used to as strong female protagonists in the book) persists instead of giving up, even if it means using some cunning to get out of sticky situations.  Even more kudos if that was Bujold herself holding onto the siren on the roof of an ambulance at one point.

Michael Douglas is the other major player, looking extremely young and coming across so stupid as Dr. Bellows that you just want to strangle the character sometimes.  Luckily, even if it may be way too late, his narrow mind starts to put things together as well.  Richard Widmark doesn't have a moustache in this, but guaranteed he would be twirling it if he could.  We also get early appearances from Ed Harris and Tom Selleck.

Michael Crichton was one of those rare people with multiple talents.  While I would never say he was a spectacular director, he was always serviceable, and he does have a way with creating fear out of empty corridors as well as filming decent action scenes.  Even if you don't remember this as being a major movie from the '70s, the visual of comatose patients suspended on wires in a bare warehouse is certainly one that sticks.  There is also a sequence with a bunch of cadavers that I'm sure will get some people squeamish.

Despite the fact that producer Martin Erlichman was hoping Coma would do to hospitals what Jaws did for swimming in the ocean, Crichton had other ideas.  He exaggerated things quite a bit, turning this into a thriller that, while plausible, still had enough elements of just being a story to keep people from avoiding medical care.  That was probably a wise choice as many elements of the story are quite plausible, and even more so with the technology we have today.  It's one of the few movies that could possibly be remade easily with only the technology getting an upgrade.

As it is this movie is a product of its time and place, but is still a smart thriller with some great, unsettling scenes and a solid, if sort of rushed, ending.  It is also a movie worth revisiting, as it hasn't been overplayed over the years on either regular movie channels or on the cult movie circuit.  It is definitely worth the time to find it, and it has also reminded me of another book I need to read.