Showing posts from January, 2012
Show all

Love Affair, or the Case of the Missing Switchboard Operator (1967) 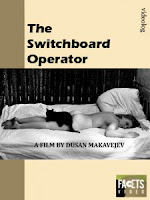 A sexologist (Aleksander Kostic) gives a brief explanation of sexuality throughout the ages and in art, leading us into an introduction to Izabela (Eva Ras), a young woman enjoying living the single life, who works as a telephone switchboard operator in Belgrade. On a double date with her best friend Ruza (Ruzica Sokic), she meets Ahmed (Slobodan Aligrudic), who works as a rat catcher. As their relationship develops, we hear from a criminologist (Zivojin Aleksic) about how criminals dispose of bodies, combined with stock footage of murders and scenes of a young blonde woman being brought up from an underground cistern. An autopsy reveals that she suffered blunt trauma and then ultimately died of drowning. Meanwhile, Ahmed leaves his small apartment to move in with Izabela, eventually having a shower installed for her. However, when he is away for an extended time on business, she gets bored and gives into the advances of a randy postman (Miodrag Andric) who constantly flirts with
Post a Comment
Read more

The Imaginarium of Doctor Parnassus (2009)

Through a seedy part of London a strange horse-drawn wagon creeps through the night, setting up shop outside a club at closing time. Dressed as the messenger god Mercury, Anton (Andrew Garfield), accompanied by the dwarf Percy (Verne Troyer), encourages the crowd to ask the immortal Doctor Parnassus (Christopher Plummer) anything they wish. Drunk and in the mood to cause trouble, one of the revelers (Richard Riddell) instead attacks the stage and attempts to get a bit too friendly with Parnassus's daughter Valentina (Lily Cole). She flees into a foil mirror with him chasing after - only for him to find himself lost inside Parnassus's imagination. At the end of his journey he is offered a choice - stop drinking and get on with life or have just one more - and he fails. Moving on to a late-night carnival, the performers also have rotten luck. Afterward, Percy finds Parnassus conversing with the mysterious Mr. Nick (Tom Waits). It turns out Mr. Nick has arrived to collect a deb
Post a Comment
Read more

Yvonne (Yvonne Williams) and Homer (Homer Nish) are Native Americans from Apache reservations in Arizona that are now living in the Bunker Hill section of Los Angeles. Homer met Yvonne after putting down roots there after his time in the Army, and Yvonne is currently expecting their first child. Despite his unemployment, Homer prefers to hang out at a bar called the Ritz with other men who have left the reservation. Feeling a sense of hopelessness, he and his friends Rico (Rico Rodriguez) and Tommy (Tom Reynolds) have elapsed into an almost nightly routine of drinking, fighting and spending time on Hill X, singing native songs and swapping stories about better times. Meanwhile, Yvonne sits at home or with her friend, hoping things will change. The Exiles could best be described as a "scripted documentary." Director Keith MacKenzie interviewed the principle performers and others prior to making the film to find out what a typical 12-hours in the life of the displaced Na
Post a Comment
Read more

As a housewife innocently prepares lunch she is suddenly attacked by the most unlikely of fruits: a tomato. Elsewhere, a man is choked to death by drinking tomato juice and a baby is devoured as two senior citizens sit helplessly by. It turns out that the government has been fiddling with the food supply. Tomatoes have gained sentience, and they are angry and hungry. After nearly being killed in a tomato attack on his helicopter, White House Communication Director Jim Richardson (George Wilson) makes it clear that this must be covered up at all cost. In an effort to make it look like the government is truly doing something, they bring disgraced special agent Mason Dixon (David Miller) out of retirement to head up an investigation by the Federal Investigative Agency (FIA) into the plague of tomato-related deaths. To hinder things along, he is saddled with other FIA operatives, such as infiltration expert Lt. Wilbur Finletter (J. Stephen Peace), disguise expert Sam Smith (Gary Smith
Post a Comment
Read more

It is New Year's Eve, and popular DJ and music show host Diane "Blaze" Sullivan (Roz Kelly) is getting ready for her show. Featuring live performances by popular new wave bands and a countdown for each time zone, it's the biggest show of her career. Only her husband Richard isn't answering the phone because he is probably coked up somewhere, her publicist has disappeared and her son Derek (Grant Cramer) is demanding way too much of her attention. Regardless, the show must go on. And on it goes, though at the start she receives a call from a man identifying himself simply as "Evil" (Kip Niven), who says he is making a New Year's resolution to kill one person as it reaches midnight in each time zone until, finally, he murders someone close to Blaze. Assuming he is holding her missing publicist, Yvonne (Alicia Dhanifu), hostage for his finale, she tries to get the Los Angelese Police Department to provide extra protection. They are reluctant, even ho
Post a Comment
Read more
More posts