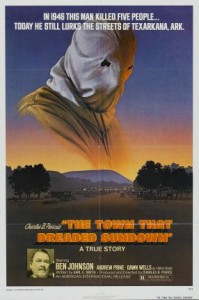 In February 1946, the cities of Texarkana, Texas and Texarkana, Arkansas are starting to return to normalcy as rationing ends and soldiers return from the war.  However, the small town peace is soon shattered after a brutal attack on a couple on a local lovers' lane.  The boy barely survives after being dragged through a broken window and beaten, while the woman is found the next day by a friend next to the roadside, also severely beaten and with deep bite marks all over her body.  The only description of their attacker is a man wearing sack over his head with the eyes cut out.

Citizens soon begin to panic, and Police Chief R. J. Sullivan (Jim Citty) increases patrols while Deputy Norman Ramsey (Andrew Pine) becomes concerned that the attacker will strike again.  And this he does, three weeks later to the date of the first attack, with Pine arriving in time to hear the shots from the woods as the killer (soon to be dubbed the Phantom) dispatches his victims, shooting the female half of the couple after tying her to a tree and repeatedly biting her.  At this point the decision is made to call in Captain J. D. Morales (Ben Johnson), a famous Texas Ranger with a reputation of being able to catch elusive killers.

Patrols are increased, and even deputies are dressed as lovers' lane couples in an attempt to lure the killer out as it once again approaches 21 days from the last murder.  However, he once again eludes capture, finding a couple that had lingered to long in the woods.  Sneaking up on the car, he manages to pull the male driver from the car.  The girl tries to gain control of the car, but it crashes.  After murdering the boyfriend, the killer attaches a knife to the end of a trombone slide and, once again tying the woman to a tree, stabs her repeatedly.

Frustrated, the police bring in Dr. Kress (Earl E. Smith) to profile the killer and, over lunch in a restaurant, a man seen wearing the killer's shoes gets up and leaves after hearing their plans.  Shortly after, Roy Lee Brown (Rainbow Johnson) reports that he was held at gunpoint by a man who claimed to be the Phantom and forced to drive him to a secluded area.  A call comes in of a man fitting the description involved in the robbery of a country store, and a chase ensues, resulting in the capture of Eddie LeDoux (Joe Catalanotto), who claims to be the Phantom, although it is quickly obvious that he is not.

Shortly after, a farmhouse belonging to the Reed family is attacked, with the Phantom shooting and killing Mr. Reed through the window of his house before shooting and seriously injuring Helen Reed (Dawn Wells), who manages to escape and alert neighbors.  She is not able to get a decent glimpse of the killer, but ballistics matches the bullets with a gun used in one of the previous murders.

With a lack of clues or suspect, Morales and Ramsey start to realize that it will take a miracle to capture the Phantom.  However, that chance comes when a car that Ramsey saw the killer drive months before is found.  They spot the killer in the woods and pursue, managing to shoot him in the leg.  However, Ramsey and Morales are delayed by a passing train, only to find the Phantom gone after the train passes.  A search with bloodhounds is fruitless and the Phantom either escapes or dies in the swamps.

I'm not afraid of revealing the ending because this is largely based on the Texarkana Moonlight Murders, a series of killings that occurred in 1946 in the cities and the surrounding areas.  The names are changed in the movie (as the narrator helpfully tells us), but supposedly everything else is true.  Well, to the extent that the murders happened in Texarkana, the killer wore a hood and was called the Phantom (among other things) and that people died.  This is from American International, so despite its somewhat documentary tone, much of what happened when it came to the murders was embellished.  The famous trombone part never really happened, but in the end this is meant to be an exploitation film, so it quickly shifts from the realm of true crime into horror.

When it decides to be a horror film it is a rather well-done and effective one.  Unfortunately, a good part of the movie is given over to exposition and making the local police force look like they outsourced from Hazzard County.  The attempts to shoehorn comedy into this rarely work, nor does the Smokey and the Bandit type car chases and stunts.

The Town That Dreaded Sundown is a rarely-seen, though (despite its flaws) influential film.  Compare the Phantom with the way Jason Voorhees is presented in Friday the 13th Part 2 and the resemblance is quite striking.  One might say the makers of this film invented the masked slasher but, unfortunately, it's more accurate to say whoever the real Phantom was (he was never caught in real life, either) did so.