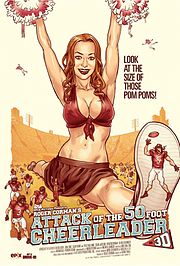 Cassie Stratford (Jena Sims) is a Freshman pledge to the Zeta Mu sorority as well as a hopeful for the cheerleading squad at Iron Coast University.  Only problem is, this is largely due to being pushed by her mom Brenda (Sean Young) into following in her footsteps.  When it comes down to it, Cassie is uncoordinated and has a bad complexion, two things that make cheerleading tryouts quite difficult - as squad and sorority leader Brittany (Olivia Alexander) makes quite clear.

Hope comes in the form of an experimental drug she and lab mate Kyle (Ryan Merriman) have been working on that alleviates the need for invasive plastic surgery and instead, with one injection, encourages DNA to rearrange itself so that cells achieve their top potential.  Hoping to gain an edge, and having see successful results on a test animal, she injects some into herself.  Unfortunately, a little comes out of the end of the syringe and lands on a passing spider as well.

Cassie's hopes come true when the next morning she wakes up, no longer myopic, with clear skin and perfect coordination.  She aces the degrading challenges Brittany sets for her and the other pledges and assures herself a place on the squad after Tiffany (Anne McDaniels) twists her ankle when attacked by the spider, which has now grown big enough to fill an entire bathroom stall.  At this time Cassie starts to grow as well and attempts to pass it off as a genetic growth spurt - that is, until they need an entire gymnasium to hold her.  While Kyle works on an antidote, evil pharmaceutical manufacturer Dr. Grey (Treat Williams), who made a deal with their professor Dr. Higgs (Ted Raimi) for the drug, decides to capture Cassie and take her away for study.

Also, Brittany has decided she has had enough of playing second best and attempts to seduce Kyle who, in self defense, stabs Brittany in the breasts with two syringes filled with the drug, causing her to grow at a faster rate than Cassie.  Escaping from Dr. Grey, Cassie decides she must save the university from a rampaging Brittany, resulting in a showdown on the football field.

Since this is a Roger Corman production I expected a few more horror elements.  We do have a giant spider and much of the same basic plot as Attack of the 50 Foot Woman, but this is 100 per cent played for comedy (and breasts) this time around.  I was hoping for squashed bodies and over the top dismemberment along with the humor.  Still, the movie is campy and enjoyable in its own way.


There are some distracting elements, however.  When using forced perspective for Cassie it's usually well done, but the digital green screen effects here are awful.  I don't mind that the spider looks silly, but some of the effects showing Cassie's size look like they were still in the preliminary stage and got rushed out before they were finished.  I know it's a low budget, but Corman and the people he hires usually know how to still make a movie look good on a shoestring.  The effects are truly distracting to the point that, at the point where you have two giant topless cheerleaders slapping each other, You keep seeing what looks like the background of an EA Sports game from 1995.

Largely, though, it's great to see Corman still putting out movies, and Attack of the 50 Foot Cheerleader does have a lot of that old time charm to make it worth seeing.  With a little more effort it could have been so much better.