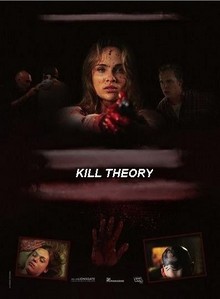 A man (Kevin Gage) is being released from a mental institution, declared reformed and not a danger to society.  A few years before, while mountain climbing, he cut a rope and sent three of his friends to their deaths to save his life.  Taking a plea deal, he got manslaughter and psychiatric care.  Doctor Karl Truftin (Don McManus), however, still has his doubts.  The man had stated early on that anyone would have done the same as he did in similar circumstances.  To make sure his patient isn't still thinking this way he is given a mandatory checkup schedule.

Next we meet a group of kids celebrating their college graduation at an isolated lake house owned by Brent's (Teddy Dunn) father.  They plan a weekend of drinking and sex, as is par for the course for a bunch of young people in a horror film.  Their plans are soon interrupted when they are awakened by the body of their friend Nicole (Steffi Wickens) being thrown through the window, with the letters "TV" carved in her chest.  They turn on a video, and find the killer's demands: that the friends kill each other until there is one left, with a deadline of 6:00 a.m., to prove his theory that anyone will abandon their friends to survive.

From this point on it becomes largely a standard slasher movie, with a few twists due to the killer's demands.  The group is whittled down until only a handful survive - and it seems they may be playing right into the killer's hands.

The film has an interesting beginning, followed abruptly by having to meet all the friends.  This quickly becomes annoying, as many of them are mere caricatures.  However, once things get moving, it is obvious it was somewhat meant this way (the killer even refers to them by their standard horror movie traits).  Happily, once we get to the meat of the story, there are a number of suspenseful scenes and a legitimate jump or two (not silly stuff like cats between the trash cans).

As an effective killer, though, the main villain largely remains out of sight.  He is around and active, his voice is heard many times, but he rarely engages anyone directly.  In this way there are some comparisons to Saw (as well as the fact that he's trying to prove some sort of point), but that's where the similarities end, despite the fact that it seems to have been promoted in somewhat the same vein.  In the end, it is just an enjoyable modern slasher film, high on gore, with a few unique twists (and a bit of pretension) thrown in.