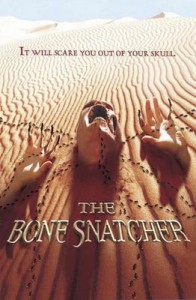 Three miners prospecting for diamonds in the Namib Desert discover a hollow area that looks promising.  Upon breaking it open, Harvey (Jan Ellis) is attacked by a strange creature.

Meanwhile, Zack (Scott Bairstow), a Canadian designer of survival equipment is sent to the mining camp as a systems analyst.  Shortly after arriving he joins in a trip to the desert in a fuel truck to look for the miners with hot-headed searcher Karl (Warrick Gier) and local customs agent Mikki (Rachel Shelley).  After finding the bodies, Karl initially believes Harvey murdered the others to steal diamonds.  However, Titus (Patrick Shai), who still holds to his traditional beliefs, quickly believes the creature to be IsiKhulu, a legendary immortal creature that lives under the earth.

While searching for Harvey, they find his bones left behind, and shortly after come face-to-face with the creature itself - which appears to be using Harvey's bones to move.  The truck soon breaks down, stranding the group in the desert, and they are targeted by the creature.  Well, creatures, actually, as they turn out to be a mutant form of ant that bonds together over human and animal bones to give themselves a means of moving faster and manipulating their environment.

Zack, Karl and Mikki soon find out that the original opening that was made was the nest, and now the ants are looking for a new colony, which it is up to them to make sure the ants are contained.

I am surprised to find so much hate for this film, as it is quite good.  It's obviously on a budget, so director Jason Wulfsohn plays it smart by having most of the CGI happen in the dark (where its dodginess isn't as apparent), as well as having a number of scenes being a man skulking around in the dark in a monster suit (Brian Claxton Payne).  What glimpses we do see of the creature when it is mobile are almost Lovecraftian.

I think the area where it does fall short is that Zack is not much of a lead character.  I found myself caring about supporting characters like Titus and Karl much more.  And, for a shoehorned love interest, there is very little chemistry going on.

In all, a fun (if highly clichéd) monster movie romp, with some beautiful cinematography of Namibia thrown in for good measure.