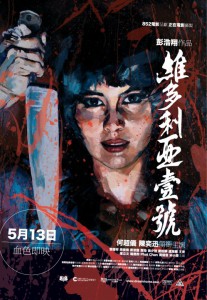 Cheng Lai-Sheung (Josie Ho) works as a telemarketer for a bank during the day and works in a women's retail store at night.  She is having an affair with Siu To (Eason Chan), who treats her in most cases as no more than a whore.  The one bright spot is that she has finally saved up enough money, along with her father's life insurance check, to purchase the flat of her dreams.  Only problem is that this has been taken away from her, as the owners have decided to up the price due to a forecast increase in value.

What they do not understand is that Cheng has always dreamed of having a flat with a view of the ocean.  Originally she wanted this for her fisherman grandfather (Hoi-Pang Lo) when she was a kid and her family was chased out of their building by triad gangs working with property developers, and later tried to do so for her dad's last few years.  Unfortunately, increasing medical bills put a damper on that.  Now that she finally has the money, a little thing like an increase in price isn't going to keep her from achieving her goals.  Instead, she decides to murder the inhabitants of the neighboring flats.

Dream Home shifts wildly in tone from that of a woman trying to find her way in modern day Hong Kong to extreme, and often disturbing, violence with a heavy dose of black humor.  Largely no one goes down easily, and Cheng gets rather beat up in the process.  Importantly, much of the film showing how she got to this point is quite interesting.  The character is quite well developed, even if you don't really agree with her methods or like her.  Much of that is better than the horror elements.

And, despite being a well-done film, this is where the problem lies.  It feels like we're watching two different movies.  There are a number of shots that are meant to represent Cheng's dual nature, and her confidence to kill is seen in the fact that she lets her father die rather than continue medical care, but the brutality and efficiency of the kills early on represent a level of planning and experience in what she is doing that is never hinted at any other point during the movie.

Even though I largely liked the movie I am unable to reconcile these problems.  The ending does manage to wrap that dual nature a bit, but not enough to explain how there is little build up to Cheng's murder spree.