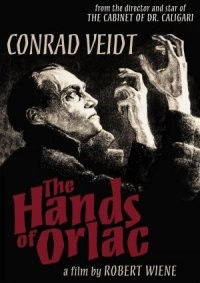 Paul Orlac (Conrad Veidt) is a world famous pianist.  While returning by train after the end of his latest tour, a mistake in switching tracks causes his train to collide with another.  Orlac survives, but with head trauma and both of his hands crushed.

Hope comes when Dr. Serral (Hans Homma) offers to perform an experimental procedure for Orlac by transplanting the hands of a deceased man onto his.  However, the hands Serral chooses belong to executed murderer Vasseur, and, thus discovering, Orlac declares that he shall not touch another human being with them.

This leads Paul to separate himself from his wife Yvonne (Alexandra Sorina) in fear of harming her, and his fears grow when he suddenly finds himself in possession of a knife that was used to murder a moneylender - the very murder that led to Vasseur's execution.  To make matters worse, Orlac also finds that he can no longer play the piano and, after a few years, their finances are drained, forcing Yvonne to go to Orlac's father (Fritz Strassny) for help, only to be refused due to the father's hate for his son.

Meanwhile, a shadowy figure has been lurking, manipulating the Orlacs' maid (Carmen Cartellieri) into furthering Orlac's fears by attempting to seduce him and then telling him he has the hands of a killer, as well as encouraging her to lead the Orlacs into going to Paul's father.  Paul finally goes himself, to find his father murdered with Vasseur's knife after his servant was lured away by a false letter that turns out to also be in Vasseur's handwriting.

Leaving the investigation, Paul runs into the man who has been conspiring with his maid.  The man claims to be Vasseur himself - and he wants a million francs to keep silent about the fact that Orlac now has Vasseur's hands, and thus would be held responsible for his father's murder.  Paul must now decide whether to turn himself in or do something to silence Vasseur once and for all.

If the plot seems even somewhat familiar, the movie was adapted, quite differently but with more fanfare, as Mad Love in 1935, starring Peter Lorre as Orlac.  It was also adapted again, closer to this original 1924 version, under The Hands of Orlac in 1960, with Mel Ferrer in the title role (this time as Stephen Orlac).  As great as Peter Lorre's performance is, Mad Love might as well be a completely different story despite sharing character names and some plot points.  In the end, that one is closer to a horror film than this original which, despite the promise of some supernatural elements early on, truly turns into a crime drama as the movie goes on.

So, looking at this as probably the closest film adaption of Maurice Renard's original novel, Conrad Veidt is absolutely at the top of his game as the tortured Orlac.  Joining again with director Robert Wiene, for whom Veidt played the somnambulist in The Cabinet of Dr. Caligari, the scenes where the hands are almost literally dragging him forward are some of the most disturbing in silent movie history.  The performance works largely due to this being from the silent era, because it is almost completely physical.

And, with the mention of Robert Wiene, you are probably thinking of the weird sets and otherworldly setting of Caligari.  The Hands of Orlac is set much more in the real world, but the set design is still quite striking, and several scenes are still the motion paintings you expect from a German expressionist film: the scene with Yvonne dealing with the creditors, the head of Vasseur looming over Paul's hospital bed before a giant, crushing fist comes down from the air and Paul's father on his chair in the corner of a dark, bare hallway are all parts that come to mind.

Also of note, the version I watched is the current restored version available on DVD.  Earlier versions were usually the 92 minute U.S. cut, which left out almost an entire reel and, as you can imagine, would probably make the movie almost impossible to watch.  The restored version is quite a work of art, my only complaint being Paul Mercer's soundtrack, which is often quite distracting and does not fit with the movie at all.