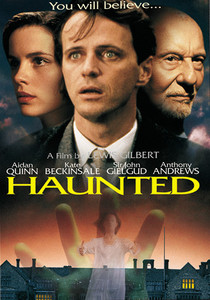 It's 1905, and David Ash (Peter England) and his sister Juliet (Victoria Shalet) are out playing.  On the way home, David accidentally pushes his sister, causing her to hit her head on a rock and fall into a pond.  David dives in to rescue her, but becomes tangled in the weeds and is unable to do so.  Feeling guilty, he imagines he hears her calling to him while her body is laying in state.

Now, in 1929, an older David Ash (Aidan Quinn) is a university professor.  After Juliet's death his family left for the United States (his mother being American and his father British), where he was raised.  During this time Professor Ash has also written a book on parapsychology, documenting his research, and spends a bit of his time proving so-called mediums as frauds.  Due to his work, he receives letters from a Miss Webb, who claims to be tortured by ghosts and is wanting him to come visit.  After resisting for months, David finally gives in, and travels to the Edbrook Manor in Sussex.

At the train station he is met by one of the inhabitants of the mansion, Christina Mariell (Kate Beckinsale), who states that she is glad that he has arrived because her and her brothers Robert (Anthony Andrews) and Simon (Alex Lowe) have been worried about her.  Upon meeting Miss Webb, whom the siblings call Nanny Tess (Anna Massey), David quickly forms the opinion that the woman is suffering the aftereffects of trauma after the death of the Mariells' parents years before.  He enlists the help of Doctor Doyle (Sir John Gielgud), a doctor who has worked with the family for years, to assist him with Nanny Tess, but she also seems unnaturally afraid of him.

Meanwhile, David becomes enamored of Christina, and stays a bit longer because of their burgeoning relationship, despite the fact that Robert (who seems to have a penchant for painting naked pictures of his sister) is becoming agitated and wishing him gone.  Also, some events begin to happen around the mansion that David cannot explain, including glimpses of what appears to be his sister.

As time goes on, he becomes more and more convinced that things are not as they seem.  Miss Webb seems to be getting worse, the relationship between Christina and Robert appears to be a bit more than brother and sister, and there seems to be some force out to harm Professor Ash.

I was surprised to see this was based on a James Herbert book.  I haven't read much by him in recent years, but I'm more used to just outright, unsubtle horror from him.  This was more of a slow build, and largely it is well done.  Aidan Quinn and Kate Beckinsale both put forward good performances, and the story, although the twist in the end is rather evident, is enjoyable.  I was quite surprised after the last few films I've watched to suddenly find myself watching a genuinely good movie.

That doesn't mean it's without its problems.  To get to the twist in the movie (I don't know if the same logic problems persist in the book) one has to dismiss a lot of what occurs as being in the imagination of the protagonist or as an illusion.  Also, one of the final scenes, meant to be shocking, turns out to be almost hilarious due to dodgy special effects.  It's a shame, because up to then it's a stylish and slightly off-kilter haunted house story, and suddenly any amount of tension that was building is gone simply because of budget reasons.  Having the voices come from the flames would have been much more effective than silly overlays of the faces.

For the large part, though, if you like these type of haunted house stories (which I do), you will enjoy this as well.