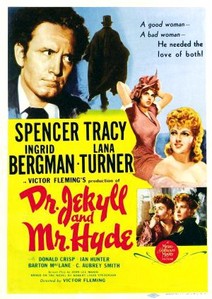 Dr. Henry Jekyll (Spencer Tracy) is attending Sunday service with his fiancee Beatrix (Lana Turner) when suddenly a man named Sam Higgins (Barton MacLane) stands up and starts yelling out blasphemous responses to the pastor.  Higgins's wife drags him out and the police are called.  Rather than have the man arrested, Jekyll has him taken to a hospital to await treatment.

Later, at a party, he is informed by Beatrix's father, Sir Charles Emery (Donald Crisp), that the reservations over the marriage of Harry and Beatrix stem from Jekyll's side research.  Jekyll couldn't help making a scene at the party, explaining his views about the dual natures of good and evil, and many of the guests found it outrageous.  Emery suggests that it is time for Jekyll to settle down in his practice.

On the way home from the party, Jekyll and friend Dr. John Lanyon (Ian Hunter) encounter a young woman named Ivy (Ingrid Bergman) being attacked on the street.  Rescuing her, they give her a cab ride home, and Jekyll accompanies her to her apartment, concerned she may be injured.  Upon finding that her injuries are feigned, he attempts to leave, despite the fact that he clearly welcomes her advances - although his devotion to Beatrix (and Lanyon's entrance) overcome his baser desires.

Jekyll's experiment is soon thrown a wrench when Higgins dies and, lacking a test subject, he decides to try his formula out on himself.  This, of course, leads to the rise of the famous Mr. Hyde, who proceeds to have Ivy fired from her job, and imprisons her in a fancy flat where he mentally and physically tortures her for his pleasure.  This goes on for several months until Emery and Beatrix return from France, with Emery giving his blessing to an early marriage after thinking that Harry has given up his research.  However, on the night that they are going to announce the marriage, Ivy comes looking for aid.  Jekyll promises that Hyde will not return but, on his way to Emery's, changes into Hyde without the aid of the formula.  He visits Ivy and, in a fit of rage, murders her.

Seeking to escape the police, Hyde returns to Jekyll's residence, only to find that he no longer has the key to the back door.  Writing a hasty letter to Lanyon, he has Harry's friend gather the ingredients for the potion to change him back.  Lanyon does so, but when Hyde comes to retrieve the ingredients, Lanyon demands the whereabouts of Jekyll.  With no choice, Hyde takes the potion, and the truth is revealed.

Harry, fearing that he is a danger to Beatrix, visits and lets her know that they cannot be married.  However, upon leaving, he once again becomes Hyde, attacking Beatrix.  Emery comes to her aid, and is beaten to death by Hyde.  Lanyon, assisting the police, recognizes Harry's cane, and leads them to the Jekyll residence, where the final denouement occurs.

There are a few differences from the older Jekyll and Hyde films, and this does pale in comparison to the Fredric March version from a decade earlier.  In fact, it starts off almost mind numbingly slow, with too many dialogue sequences that, for some reason, are without music.  However, once Tracy gets to become Hyde, things pick up.  The initial transformations involve hallucinogenic interludes that are similar to those in a Ken Russell film (most notably Jekyll driving a chariot and the horses turning into Beatrix and Ivy).  Tracy's performance as Hyde is miles away from the dull, milquetoast Jekyll, but that is par for the course for adaptations of this story.  What does make it different is that Tracy really shines in the evil parts.  A great script helps - and it almost makes the viewer forget that, while everyone else is British, Harry Jekyll is speaking with an Eastern United States accent.  That's not as bad as Bergman trying to sound Cockney early on - something she wisely abandons later.  One gets the feeling the fake accent may have been part of her character, but that's never really explained.

This is one of the lesser-known adaptations of Robert Louis Stephenson's novella, but it is by no means a bad film.  Director Victor Fleming does a good job as usual, there is plenty of atmosphere, and whoever the stuntman was filling in for Tracy at the end (a number of jumps over pointy fences) was great to watch.  It just could have lost about 20 minutes to tighten things up.