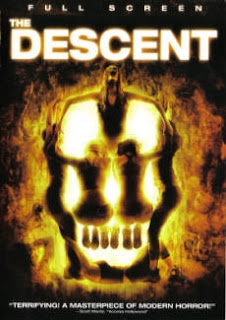 Sarah (Shauna Macdonald), Beth (Alex Reid) and Juno (Natalie Mendoza) are three friends on a whitewater rafting trip.  After completing their journey downstream, they are met by Sarah's husband Paul (Oliver Milburn) and daughter Jessica (Molly Kayll).  On the way back home, Paul is distant and distracted, resulting in a head-on collision with another car that kills him and Jessica and puts Sarah in the hospital.  She later awakes to find that Juno has left for the United States.

A year later they gather again in the Appalachians for a planned caving trip.  They are joined at a remote cabin by Rebecca (Saskia Mulder), Sam (MyAnna Buring) and Holly (Nora-Jane Noone).  Soon they are off exploring what they believe is the cave system they had planned.  However, shortly after Sarah narrowly avoids being crushed in a cave-in while making her way through a small passage, Juno reveals the truth: thinking the intended destination was full of tourists, she decided to take them exploring at a place she was sure had not yet been mapped.  However, with their way out blocked, the women must now find their way out.

After a treacherous crossing of an underground chasm they also discover that they are not the first to enter the caves.  Old climbing equipment is found, as well as cave paintings showing various animals that were hunted - and another entrance to the cave system, that they set off to find.  The women also quickly find out that they are not the only ones down there, as the inhabitants of the caves soon make themselves known.  Pale white and blind, the original tenants are still there, and waiting to pounce on anything that enters.

I never saw this when it originally came out because the advertisements made it look like just another modern horror film.  No mention that the cast was mostly female, no real explanation of what the film was about; it largely looked like a similar movie that came out the same year, The Cave, and I imagined some CGI monster and blaring nu-metal music.  The only reason I finally saw it in fact is because it has received so many accolades since (I really only became aware of this within the last year), and because director Neil Marshall's Dog Soldiers was such a good film.  The last third of this movie resembles that more than a little.  No, the crawlers are not werewolves, but the women's reactions are quite similar to the soldiers in the previous film.  Largely, this can be seen as a flipside of that movie.

I am also happy to say that I saw the original version.  I read how the theatrical U.S. release was changed, and that makes it almost an entirely different movie (and sets it up for a crappy sequel, which thankfully Marshall had not much to do with).  It does leave some of the denouement vague, which is pretty important in this case, especially since it also leaves open the question to some who don't take the events in the film at face value, but instead think that the creatures and the events that happen are all the result of Sarah being mentally unstable.

I must say that I think this does live up to its reputation.  It has one of the best reveals of a monster ever (with completely real reactions from the actors, just like in Alien).  Though the most effective scene is still Sarah getting stuck in that small passage, which shows that the movie could have still been quite suspenseful (especially with the wonderful set design) without the monsters.