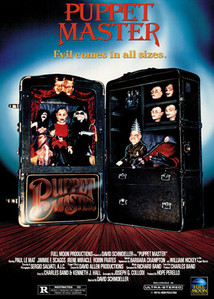 In 1939, Andre Toulon (William Hickey) has rented a room at the Bodega Bay hotel in California.  Outside, two assassins arrive.  However, they are observed both by one of Toulon's puppets in the window and by Blade, who happens to be keeping watch outside.  Toulon is well aware of what the assassins are after, and quickly hides his puppets, and the Egyptian scroll that contains the formula for giving them life, before committing suicide.

Jumping ahead 40 years, a group of psychics receive visions from a friend saying to meet them at the now closed hotel.  Upon arriving, they find the sender of the message, Neil Gallagher (Jimmie F. Skaggs), dead, and his grieving wife Megan (Robin Frates) wondering why they were summoned.  It turns out that for years he had been searching for Toulon's secrets, and found them while renovating the hotel.  Shortly after, he shot himself in the head.

The psychics decide to try and get in touch with Neil's spirit to find out what he was up to, and spend the night in their different ways: Alex (Paul Le Mat) is a Yale professor who has precognitive dreams, and has been having visions of Neil killing Megan, while Dana (Irene Miracle) largely works as a fraudulent fortune teller, and Carissa (Kathryn O'Reilly) and Frank Stamford (Matt Roe) engage in a sort of sexualized psychometry.  They don't contact Neil, but they do manage to run into Toulon's puppets - who do them in in a number of creative ways.

All except Alex, who soon finds out that Neil did learn Toulon's secrets - and applied them to himself, and is now the one controlling the puppets.  The puppets, however, may have different ideas than their new master.

The first three movies in this series are one of the cornerstones of Charles Band's Full Moon Video, one of the most famous of the '80s to '90s direct to video film studios.   This first chapter about Andre Toulon's vengeful and sometimes protective puppets is interesting, especially when things get going, but is a bit slower moving and less satisfying that some of the later parts.  For the budget they have the effects are pretty decent, and the Bodega Bay Inn (really the Castle Green Hotel in Pasadena) is a wonderful location.  The beginning of the film, with the assassins coming after Toulon and Blade trying to make his way back to the hotel room is one of the high points.  Unfortunately, the silly sexual antics of the Stamfords does nothing but slow things down to a crawl.  It's as if the sex was shoehorned in to extend the movie or to make the producers happy.  None of it is particularly sexy, just boring.

So, if you want a hint of what the big deal about Full Moon was, this is one of them movies you want to see, but the second and third chapters are what really makes the story.

Oh, and Barbara Crampton barely shows up in a cameo at the beginning.