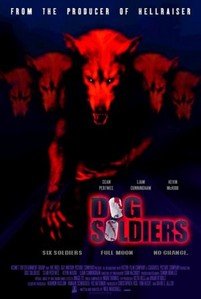 Sgt. Harry G. Wells (Sean Pertwee) is sent to lead a troop of soldiers on a training mission against Special Ops in rural Scotland.  None of the soldiers really want to be there, but they decide to make the best of it and get things done with.  Choosing a route to try to get around where they think the "enemy" would be, the troop is under observation by Capt. Ryan (Liam Cunningham) the whole time.

The next morning the troop arrives at the Special Ops base to find it destroyed and Ryan close to death.  Realizing that they are now up against a real enemy, the soldiers switch to live ammunition and prepare to take care of whatever attacked Ryan's men.  Soon, though, they find themselves under attack by werewolves.  Corporal Bruce Campbell (Thomas Lockyer) is impaled on a log while trying to escape, and Sgt. Wells is mortally wounded.  Pursued, they are rescued by zoologist Megan (Emma Cleasby), who takes them to the only house within range.  Intending to leave from there, their plans are foiled by the werewolves destroying the car.

Meanwhile, Private Cooper (Kevin McKidd) takes over command, and Ryan appears to be recovering quickly from his wounds.  There is no love lost between Cooper and Ryan, as the latter rejected him during special ops training due to Cooper's failures to follow orders he thought unnecessary.  Of course, it eventually turns out that the whole mission was for Ryan's group to catch one of the werewolves alive - and use Wells's men as bait.

Now it is up to the survivors to last out the night in the isolated farmhouse while repelling what appears to be an unstoppable enemy.

I have been wanting to see Dog Soldiers for a number of years, and for some reason have never got around to it.  I think it was because usually when it came on television it was on a station like Sci-Fi that would butcher the movie.  Having seen it, I will say it was worth the wait.  The lycanthropes are a bit different, but setting it in rural Scotland and the propensity for them to attack random campers is almost a spiritual successor to An American Werewolf in London.  This also seems to have a nice sense of humor as well, even if it is dryer than John Landis's film.

I found the werewolves to be quite convincing and Neil Marshall does some tried and true tricks to hide the small budget.  It does in a lot of ways feel like a much more expensive film.  And, though quite a bit of it moves along predictable lines, the performances carry it.  I also give Marshall some points for in large part using the guns realistically in most cases.

So, yes, Dog Soldiers is one heck of a werewolf movie, and it does make me look forward to seeing more of Marshall's films.