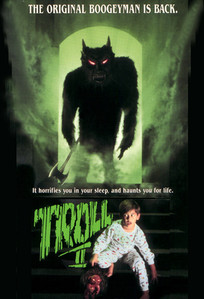 Joshua Waits (Michael Stephenson) hears the tale of the Goblins capturing a young man named Peter from his Grandpa Seth (Robert Ormsby).  It turns out his grandfather is trying to warn him, despite the fact that his parents don't believe him.  It turns out that they have made arrangements to stay in the small town of Nilbog, living in a farmhouse in a sort of "exchange," where the farmers will live in their house in the city.  While father Michael (George Hardy) and mother Diana (Margo Prey) are looking forward to the vacation, Joshua is apprehensive, and his sister Holly (Connie Young) would rather spend time with her boyfriend Elliott (Jason Wright), who agrees to go with the family.

However, the next day Elliott fails to appear, but rather follows the family in his camper van with friends Arnold (Darren Ewing) and Brent (David McConnell).  The family arrives in Nilbog and settles in while the boys, facing Holly's wrath, stay on the outskirts in their mobile home.  Quickly Joshua realizes something is wrong, and Seth appears to him to try to prevent the family from eating any of the food that was prepared.  Thinking quick, Joshua pees on the table, incurring his father's anger.

Meanwhile, Arnold goes for a walk and runs into a young woman (Christina Reynolds) being chased by a group of Goblins.  Standing up to them, he is struck in the shoulder with a spear.  Seeking refuge, Arnold and the girl enter an old church inhabited by Creedence Leonore Gielgud, who takes them in and gives them a special broth - which serves to turn them into vegetable matter so that the goblins may feed.

Increasingly things become stranger until the Waits are forced to believe Joshua and realize that the people in the town are being hospitable only because they are waiting for the chance to consume the family.  Joshua soon discovers that the only way to defeat them is to concentrate and, using the powers of good, destroy the magic stone that gives the Goblins their power.

Troll 2 is one of those movies of legend, like Plan 9 from Outer Space, that transcends its own awfulness and becomes something else entirely.  I thought it was going to be an endurance test, but instead it turned out to be enjoyable.  The script is awful, the acting is stilted and the Goblins look horrible.  However, it has that right touch of being completely and unquestioningly off its nut that it almost becomes what the director intended.

What does get me is that Claudio Fragasso does not appear, at least when it comes to filming, to be that incompetent of a director.  In the documentary about this film, Best Worst Movie, he comes off as arrogant and pretentious, unable to understand how awful this creation is.  Seeing some of his filming techniques and how successfully he captures the landscapes of Utah, I can see why he may be frustrated.  Every other aspect of this movie may be a horrible, horrible mess, but technically he knows what he's doing.

When it comes to plotting, however, it goes from following the main plot line to veering off into weird directions that have nothing to do with anything else (Creedence and Brent's popcorn tryst, for instance) other than it seems that it was in the script somewhere.  In many ways, especially this, Troll 2 is a typical Italian horror script.  Even famous directors like Dario Argento are known for being all over the place.  Fragasso is no Argento, but I think some of the weirdness many audiences experience with this is that it follows pacing that is not out of the ordinary for an Italian director, but when viewed by American audiences, with all the flaws inherent in the film from the beginning, makes it look like it came from some alternate dimension.

I understand the cult forming around this, although I do see more of a hipster vibe in those watching this than, say, The Rocky Horror Picture Show or The Room.  Or maybe I get that impression from a number of the people you see in Best Worst Movie involved in reviving this film.  Still, for once, they're right.  It is rare that something this bad comes all the way back again, and it should be enjoyed for what it is.