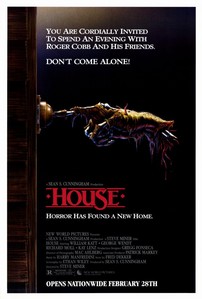 Horror writer Roger Cobb (William Katt) is having a problem producing his next novel, which he intends to be about his experiences in Vietnam.  With his agent and publisher breathing down his back, he decides to get to it - especially after his aunt (Susan French) dies and he comes into possession of the house he grew up in.  Unfortunately, it is also the house where his son went missing, but he decides to power through it and get the book done.

Unfortunately, that's not as easy as he thinks it is.  He finds himself putting up with nosy neighbor Harold (George Wendt), who clumsily tries to be friends, and pretty Tanya (Mary Stavin) who uses her feminine wiles to get Cobb to babysit.  Of course, he has no time for this with a book in development - not to mention a monster in a closet, a she-demon buried in the back yard and the ghost of Big Ben (Richard Moll), one of his Vietnam squad, out for revenge.  Not to mention he finds a way in which he just may be able to save his son.

Yes, that is about it for this '80s cult classic.  It is very thin on plot, but that never mattered to me when I saw it in the past.  I was more concerned about the creatures, an the idea of a house branching off into different dimensions has always been one of my favorite (if I could just remember the name of the movie where an entire house is transported to another dimension, I would be happy).  However, time hasn't been kind to this one.  There are a lot of low-budget, even microbudget, '80s films where the directors managed some great effects that still amaze today.  This is not one of those.  It's all people in what are obviously rubber suits.  Only Big Ben's design holds up.

There also isn't really very much that happens.  Yes, there are a few funny parts, and I like the winged demon with the shotgun, but I don't know if all the crazy things I remember happening in this film might have been confused with some similar films over the years.  The problem is that usually when I do get to repeat viewings like this that it has been 20 to 30 years, and many of the movies I have seen have similar plots and get a bit jumbled.  So, unfortunately, this was nowhere near as entertaining as I remembered.

Part of that may be Steve Miner's directing.  He is a workman-like director, and he did direct Friday the 13th Part 2, which is the best in the series prior to Jason dying, but something like this needs the frenetic hand of Sam Raimi or amorality of Stuart Gordon to pull it off.  Instead, we get an ambitious idea with blah execution.