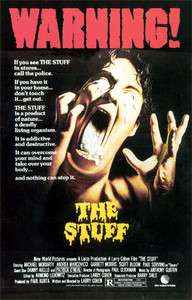 A new food sensation is sweeping the nation.  It's The Stuff, a creamy dessert treat with no artificial ingredients and no calories.  Everyone is eating it.  In fact, no one seems to be able to get enough of it.  That is, except for Jason (Scott Bloom), who seems to prefer not eating mystery substances he sees moving on their own in the refrigerator at night.

The ice cream companies are not pleased either, as they see their profits dropping.  Attempts to duplicate The Stuff have failed, so in desperation they turn to David "Mo" Rutherford (Michael Moriarty), an ex-FBI agent who now specializes in industrial espionage.  For a hefty sum he agrees to infiltrate the company making The Stuff and find out the formula.  First step: contact Nicole (Andrea Marcovicci), the person who leads the marketing campaign for The Stuff, and convince her to set up meetings with executives and a tour of the plant under the guise of an advertising blitz.

Rutherford also attempts to find those in the FDA that approved The Stuff for human consumption, but most seem to be dead or out of the country.  A visit to one of the few who stuck around, Vickers (Danny Aiello), is willing to provide some information, but appears unnaturally afraid of his own dog, who it appears has been living off a diet of The Stuff.  Failure to stockpile enough proves fatal for Vickers, but the the information he provides Rutherford leads to Stader, Virginia, the town where they did the testing.  Upon arriving, it appears deserted, with the population largely moving to Midland, Georgia.  Rutherford, though, is not the only person trying to get to the bottom of The Stuff.  "Chocolate Chip" Charlie W. Hobbs (Garrett Morrison), whose company was stolen from him shortly after the dessert began manufacture.  Rutherford and Charlie decide to work together to bring them down.

Meanwhile, Jason resists his family's insistence that he join them in their new culinary pursuits, going to so far as rampage through a grocery store destroying containers of The Stuff as he goes.  This gets him on the news and noticed by Rutherford, who shows up just in time to save him from his parents and brother, who seems to have fallen under control of creamy snack.  A trip to the factory in Midland reveals what everyone has feared: far from being just a dessert treat, The Stuff is something quite alive, and has the tendency to consume people from within and control the empty shells left behind.

With the aid of Colonel Malcolm Grommett Spears (Paul Sorvino), the head of a backwoods militia, Rutherford, Nicole and Jason seek to make the truth known to the world at large and save humanity from becoming a puppet to The Stuff.

This is why we still need independent film makers.  Sure, it was 1985, but even then can you imagine pitching a story about a killer dessert?  Larry Cohen manages to put together an hilarious and exciting movie based around the premise which, in just explaining it, sounds like it would be an outright disaster. Instead, there are some real thrills, as well as plenty incongruous moments (the militia emerging from cabs in the middle of town, weapons at the ready, for instance).  Little moments that just seem completely unexplainable in or out of context are why I watch these types of movies.

This is also one of those rare '80s films where the fashions and the music, rather than making the movie look dated, actually add to the humor.  The movie, once past the obvious creature feature description, is also made to make fun of runaway consumerism, and if there is a decade that was famous for this it was the '80s.  The outright shallowness of the time makes it a lot less a stretch of the imagination that someone could just scoop a bunch of stuff out of the ground, throw it in a container and sell it.  Not that the world today is any less shallow; it's just that people can look back on something like this and laugh at the "idiots" who would fall for it - probably while watching on their iPad as they wait in line to be the first to buy the newest iPad.