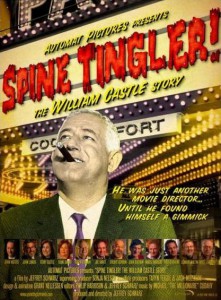 William Castle was the master of gimmicky horror pictures.   He began his film career making "B" features, and eventually moved up to making movies following his own vision, which often meant doing things like insuring audience members' lives with Lloyd's of London, having skeletons fly across the audience and installing buzzers in their seats.

This documentary covers his formative years and, like one would expect, spends much of its time lingering on his career from the late '50s and early '60s, when he managed to put butts in the seats to see typical b-movie fare like The House on Haunted Hill and The Tingler mainly through promotion.  It also covers his involvement with bringing Rosemary's Baby to the screen (which he was originally supposed to direct, but instead produced - something I didn't previously know), and even spends some time on his last film, Shanks.

Throughout there are the expected interviews with directors ranging from John Landis to Roger Corman to John Waters, talking about his influence.  Above all, though, is his daughter Terry, who seems to have inherited much of her father's spirit.

The digital manipulation of the posters and some old photos annoyed me a bit, but largely this is a great tribute to a classic horror movie director.  And, if you haven't seen any of his films, I suggest you do.  Yes, they were gimmicky and, no, they were usually not as scary as promised (except maybe for Strait-Jacket, which largely plays things straight), but they are all fun to watch.  He was able to get actors such as Vincent Price and Joan Crawford to play in his movies for next to nothing, and he never failed to release something entertaining.