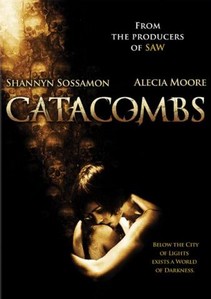 Victoria (Shannyn Sossamon) receives a postcard from her sister Carolyn (Pink) who is studying in Paris.  Despite a number of nervous disorders she agrees, hoping that a trip might help.  Upon arriving, she is introduced to Carolyn's friends, who have a predilection for scaring people.  It also turns out that Victoria has arrived just in time for a part in the catacombs, a winding maze of bones making up the underbelly of the city of lights.

After enjoying the party a bit the group goes swimming.  There, Hugo (Cabral Ibacka) tells her the story of the Cult of the Black Virgin, an 18th century group of Satanists who took up residence in the catacombs for the purpose of the bringing about the antichrist.  As the story goes, he was fed on raw meat, forced to wear a goat skin mask and was chained until one day breaking free.

Victoria and Carolyn leave the group briefly to talk and soon become lost - resulting in a hulking man with a goat mask attacking and killing Carolyn.  Victoria is then chased through the catacombs, making it back to the party just as the police arrive to break it up.  In the confusion she is knocked cold, waking up hours later to find herself alone and locked in.  Knowing that her pursuer is still there, she sets off in search of another exit, eventually running into Henry (Emil Hostina), who has a street map and is also attempting to find the exit.  On the way Henry falls through some rotten boards and becomes trapped.  Victoria, after unsuccessfully attempting to rescue him, grabs the map and runs; however, she gets turned around, meeting up with an enraged Henry, who she knocks out (or possibly kills).

Accidentally leaving the map behind, she continues on, trying to find an exit, and finding herself once again pursued.

Sometimes you know ahead of time that you are going to hate a movie.  You can smell it from miles off.  The way the cover of the DVD looks, the fact that it has a plastic pop star mentioned prominently in the credits, the fact that from the very description you can already hear bad gothic techno music blaring from the DVD before you ever put it in.  This is one of those films.  And, no, it isn't one of those that turns around and surprises you.  It lives up to its promises, and then some.

Do we really need shaky cam (which I don't mind as much as most people seem to) combined with bad sped-up CGI?  Do we really need the lead character to get knocked out and the scene to remain dark so long that the viewer literally begins to nod off themselves?  And, to top it off, do you really have to take a decent actress and give her nothing to do but scream for an entire film?

Catacombs is the epitome of everything bad about modern horror films, and Tomm Coker should never be allowed to touch a camera again.  Hell, Children of the Living Dead was better than this, and that is considered a low point in cinema all around.