Poultrygeist: Night of the Chicken Dead (2006) 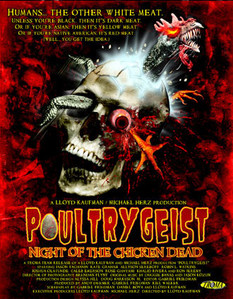 A year later, Arbie returns to town to find out his beloved graveyard has been paved over and replaced by an American Chicken Bunker restaurant.  It's opening day and the place is surrounded by protestors of all types - including Wendy, who has now turned lesbian and taken up with Micki (Allyson Sereboff).  Angry at being replaced (and being beat up by Micki), Arbie decides he's going to get back at Wendy by applying for a job at the new restaurant.

Unfortunately for Arbie it is going to turn out to be the worst day to start work.  The frozen chickens scream when fried, and there are veiny, pulsating eggs everywhere.  Still, manager Denny (Joshua Olatunde) is determined to make a go of it.  It's even more important since owner General Lee Roy (Robin L. Watkins) is popping in for a visit.

Along with the General comes a guy in a chicken outfit (Lloyd  Kaufman) who seems to bear more than a little resemblance to Arbie.

It's not long before the possessed pieces of chicken start turning the inhabitants of Tromaville into undead, chicken-headed zombies, and it is up to our heroes to last out the night and take out the zombie menace.

No, I couldn't resist the October Horror Movie Challenge without at least watching one Troma film, and I have been wanting to see this for a long time.  It didn't disappoint.  There is no opportunity missed to be disgusting, and the musical numbers (except for the surprising "Slow Fast Food Love") are largely embarrassing.  Still, it has everything one would want in a Troma film, including a cameo from Joe Fleishaker.

It is all silly, over-the-top fun, and one of the better movies Troma has put out in recent years.