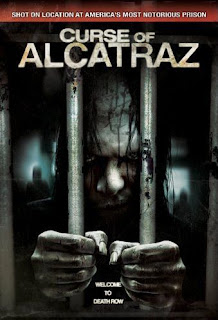 In 1961, Alcatraz is planning on building cells in a new area of what used to be the fort.  While in the process they are keeping a prisoner who has shown violent tendencies locked in the area.  A guard, concerned by maniacal laughter, heads down into the cell to see what the prisoner is up to, only to be murdered shortly before the prisoner takes his own life.

Fast forward to modern times.  While renovating the prison, park rangers break into the area that had been planned for new cells.  After making their way through the walled off area, Ranger Vince (Willian Van Noland) finds a body.  Detective Lana Campbell (Sarah Jane Nash) is called in to investigate, and quickly realizes the body is not that of a recent homicide victim, but perhaps of a Native American buried prior to the construction of the fort in the 1850s.  She calls her friend Dr. Michael Hauser (Joe Jones), a professor of archaeology at San Francisco State University, to come have a look.  However, Vince is hiding something.  He pricked his finger on a tooth of the body, and his hand is rapidly becoming swollen and infected.

Dr. Hauser arrives with his assistants - field worker Alissa (Jessie Camacho), forensic experts Tiffany (Candise Lakota) and Andrew (José Solano) and anthropologist Kurt (Alex A. Quinn).  While unearthing the body, they are informed that the ferry that is to take them home for the night has been delayed due to mechanical problems, and the group will be spending the night in the prison.  Too bad Vince is going from a mere infection and into insanity, and Kurt is starting to show some of the same symptoms.  Alissa becomes more concerned that a curse has been visited upon the prison, and she is somewhat right, as it turns out that they have all been exposed to a previously unknown virus - and that Vince and Kurt are both out for blood.

This year I am not having the best of luck with the October Horror Movie Challenge.  I kept telling myself tonight that I should watch Frogs.  I'm well aware that's a bad film, but it's the type of bad film I like.  So far too many of these films have been utter garbage.  For the most part, so is this one.  It feels like a student film padded out to a feature, since the few parts that have an redeemable value are the last 20 minutes.  We have another case in which the characters are largely annoying and unlikeable, and it's made even worse by amateurish acting and a mediocre script.

The good news is that director Daniel Zirilli at least seems to know what he's doing behind the camera.  Many of the set up shots are well done (hard to screw up the San Fracisco Bay anyway) and he manages to pull a decent, if cliched, slasher film out at the end, but for the most part Curse of Alcatraz is a slow moving, badly acted mess with the one redeeming value that it was actually filmed in the prison.