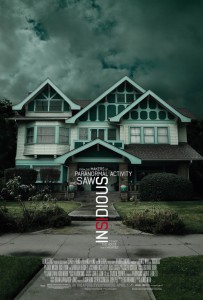 Young couple Josh (Patrick Wilson) and Renai Lambert (Rose Byrne) move into a new house with their three children.  While exploring the house their oldest, Dalton (Ty Simpkins), takes a tumble off of a ladder in the attic.  He seems fine, but the next day they are unable to wake him up.  The doctors say that he is not exactly in a coma as all brain function seems fine, but the child remains unconscious.

Three months later he has been moved back to the house so that his parents may care for him.  Soon after, Renai starts hearing sounds on her baby monitor that sound like voices.  This is followed up by full apparitions, bloody hand prints on Dalton's sheets and other goings on.  It seems that the house they purchased is haunted by malevolent spirits, and so they do what any smart couple would do: move.

Unfortunately, as they settle into their new home, the activity seems to get worse.  After Lorraine (Barbara Hershey), Josh's mother, observes a red-faced demon in their kitchen, she contacts Elise (Lin Shaye).  Elise and her two assistants investigate the house and find that it is not the dwelling that is haunted, but rather Dalton himself.  It turns out that Dalton has been astral travelling when he thought he was dreaming, and has now become lost.  A host of entities are hovering around his body waiting to get in - the most powerful being a demon that wants to make its way into the world.

Josh is skeptical at first, until he learns a secret: he was once much like Dalton, but Elise and Lorraine helped him forget his childhood trauma and encouraged him not to have pictures taken due to the fact that an old woman could be seen getting closer and closer in the background, apparently waiting to possess Josh's body at the first chance it got.  Now, however, Josh must recall how to travel, as it is up to him to journey into a world called the Further and bring Dalton back to the land of the living.

At first I didn't know where this film was going.  Like most horror films, I dread any modern fright film with a PG-13 rating, even if it is from one of the guys responsible for the first Saw film.  Happily, there are quite a number of funhouse scares as the family comes to grip with what they are dealing.  As things continue, there are plenty of just plain weird moments: Specs (Leigh Wannell) and Tucker (Angus Sampson), Elise's assistants, and their steampunk inspired gadgets, for one, including a modefied View-Master.  This has got to also have one of the strangest seances I've seen in a movie.  We also have a demon that likes Tiny Tim.

There are some places where the movie could have been better.  The Further itself is no big shakes, largely due to budget reasons, so the astral realm ends up being quite interesting in places, but ultimately stagey and definitely not as scary as seeing the ghosts try to come into our realm.

I am glad I gave this a go, and it was largely based on recommendations that I've been seeing as part of the October Horror Movie Challenge, as otherwise I probably would have completely ignored it.